Music is one of the integral topics at the Ipoh Music Symposium’s '1960s Pop: Emulation, Revolution And Legacy' edition in Ipoh, Perak on Oct 21-23. Photo: Naza Mohamad

The Ipoh Music Symposium annual series in the state capital of Perak returns as an on-site event from Oct 21-23 with the theme 1960s Pop: Emulation, Revolution And Legacy (Pop 1960-an: Emulasi, Revolusi Dan Legasi).

The focus for this latest edition of the Ipoh Music Symposium is a look back at pop culture, music, film and fashion from the 1960s in Malaysia (and Singapore).

Organised by arts agency People of Remarkable Talents (PORT), the bilingual programme (Bahasa Malaysia and English) features a diverse line-up of presenters – writers, academics, musicians, researchers, historians and more – who will come together to dissect topics surrounding the swinging 1960s, an unforgettable decade for a new and independent country like Malaysia. Veteran musician Adnan is a part of the 1960s music forum and will also be on stage for the accompanying concert at the Ipoh Music Symposium. Photo: The Star/Filepic

The main venues for the symposium include the PORT Ipoh house and Travelodge Hotel, while the Auditorium RTM Ipoh and the Lady Boss studio will host the Malam Pesta 60an concert (Oct 22) and workshops (Oct 21) respectively.

“The 1960s-era in Malaysia was an important period which changed the socioeconomic and cultural strata of the society. Apart from the development of educational and cultural institutions at that time, the fields of music, literature, and film also entered a glorious phase and impacted the creative world of the country. Therefore, 1960s Pop: Emulation, Revolution And Legacy aims to collate all kinds of important information from researchers and scholars, as a guide and reference for the present and future generations,” says Nur Hanim Mohamed Khairuddin, PORT’s general manager, and one of the symposium’s main drivers. Augustin will be discussing alternative music histories and archiving at the symposium. Photo: Penang House of Music

At the symposium, music legend/composer Johari Salleh will deliver the keynote speech (Oct 22) based on his immense experience in the music industry, especially during the heady 1960s, where Malaysian pop music and youth culture met head on and thrived.

Themes such as “Local Identity”, “Creativity And Exploration” and “Legacy And Impact” are listed in the programme, with discussions spanning pop yeh yeh songwriting, pop Iban (Gerai Nyamai) styles, Indonesian 1960s counterculture music, the early days of feminism and pop culture, 1960s film and rebellion, fashion trends and others. 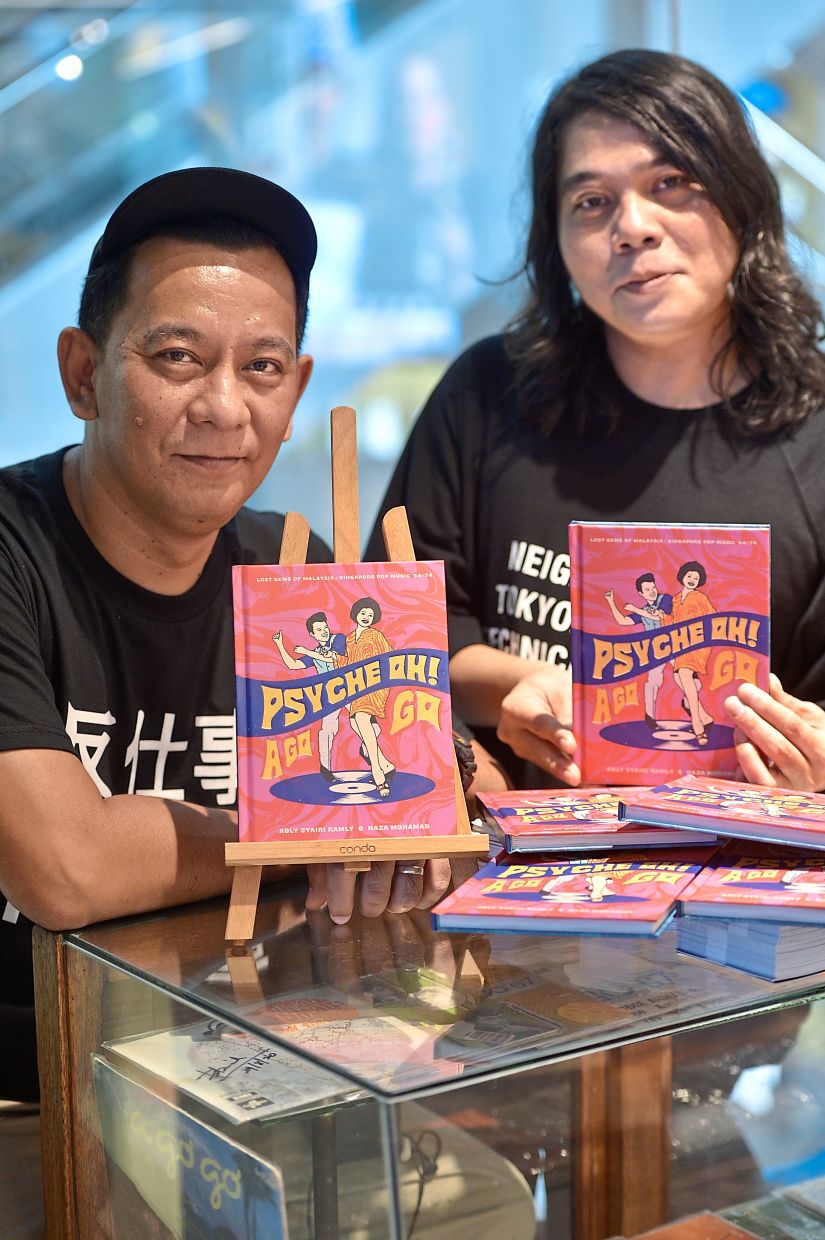 Adly (left) and Naza, the duo behind the 'Psyche Oh! Ago Go' book which focused on 1960s lost bands in Malaysia and Singapore. Photo: The Star/Filepic

American music researcher/deejay Carl Hamm’s film Pop Yeh Yeh: Documenting The Golden Age Of Pop Music In Singapore And Malaysia will also be screened at the symposium on Oct 21, giving local viewers a first look at the documentary.

In 2010 and 2014, Hamm made two highly successful trips to these parts to interview and document the stories of an array of 1960s pop artistes (from Malaysia and Singapore).

"Going through the footage again after so long, it’s amazing to me that I was able to meet and interview so many artistes. The film will include excerpts from many of these interviews, as well as rare photos, and even a few film clips from films shot in Singapore and Malaysia on compact Super8 cameras by unknown travellers to give viewers a sense of what Singapore and Malaysia looked like back then," says Hamm in an email interview.

"I’m very grateful, once again, to Adnan Othman for putting me in touch with the organisers of the Ipoh music conference. Being invited to participate in this event was a great motivation for me to get back to work on the project that has remained my life’s passion. I hope to maybe turn this film about Pop Yeh Yeh into a series on a streaming service someday, to give the story and music a wider audience. I’m grateful that, for starters, this 'rough edit' preview of the documentary will be shown to people who know and love this music already," he adds. US-based deejay Hamm's 'rough edit' of his music research film titled 'Pop Yeh Yeh: Documenting The Golden Age Of Pop Music In Singapore And Malaysia' will be shown at the symposium on Oct 21. Photo: Carl Hamm

A special community-led exhibition to narrate the development of Malaysian music in the 1960s will also be held at the Black House, PORT Ipoh from Oct 21-30.

“This programme provides the public the opportunity to get to know more closely, important figures who have greatly contributed to the movement and development of the local and regional music world.

"By building a new relationship or network between the stakeholders, artists, students, and academics, more projects related to the music field in the Malay Archipelago can be triggered and organised – indirectly benefiting musicians, researchers, ‘behind the scene’ workers and also music lovers at large,” says Hanim.

To attend these free admission events, the general public can register at the link provided on the PORT website or on its Instagram handle.

A commitment fee is required during registration and it will be returned to the attendee during the physical event.

A large part of the 1960s Pop: Emulation, Revolution And Legacy symposium (talks, forums and concert) will be made available on Facebook Live, or they will be uploaded post-event.