Sri is an inventive young chef who uses his childhood memories of growing up in south India to create refined, creative south Indian fare. Photos: Nadodi

On a warm Tuesday night, Nadodi offers welcome respite from both the muggy weather outside as well as the anxiousness stirred by a global pandemic that shows no signs of abating.

The restaurant, which means “nomad” or “wanderer” in most South Indian languages – from Tamil to Malayalam to Kannada – is the brainchild of Abethan Kanthasamy, the managing director of the Cinnamon Group, which manages the restaurant as well as other popular local eateries like Aliyaa, Kikubari, Yarl’s and Nero Nero.

Abbi, as he is popularly known, was inspired to start Nadodi after visiting the holy grail of progressive Indian food – Gaggan in Bangkok. The restaurant (now closed and reopened under a new moniker – Gaggan Anand Restaurant) was famed for putting Indian food on the gastronomic map.

At first, Abbi was impressed by what he experienced. Until he went back a second time, that is, and found south Indian food missing from the menu. He decided he’d like to do a fine dining Indian restaurant in Kuala Lumpur.

From those beginnings, Abbi managed to pool together some talented people at Gaggan who believed in his idea that south Indian food could be elevated and refined.

To help nurture the idea he had of presenting authentic South Indian food in a different mould, Abbi discovered a kindred spirit in the restaurant’s talented young head chef Sricharan Venkatesh, who took full control of Nadodi’s kitchen two years ago when he was only 28. 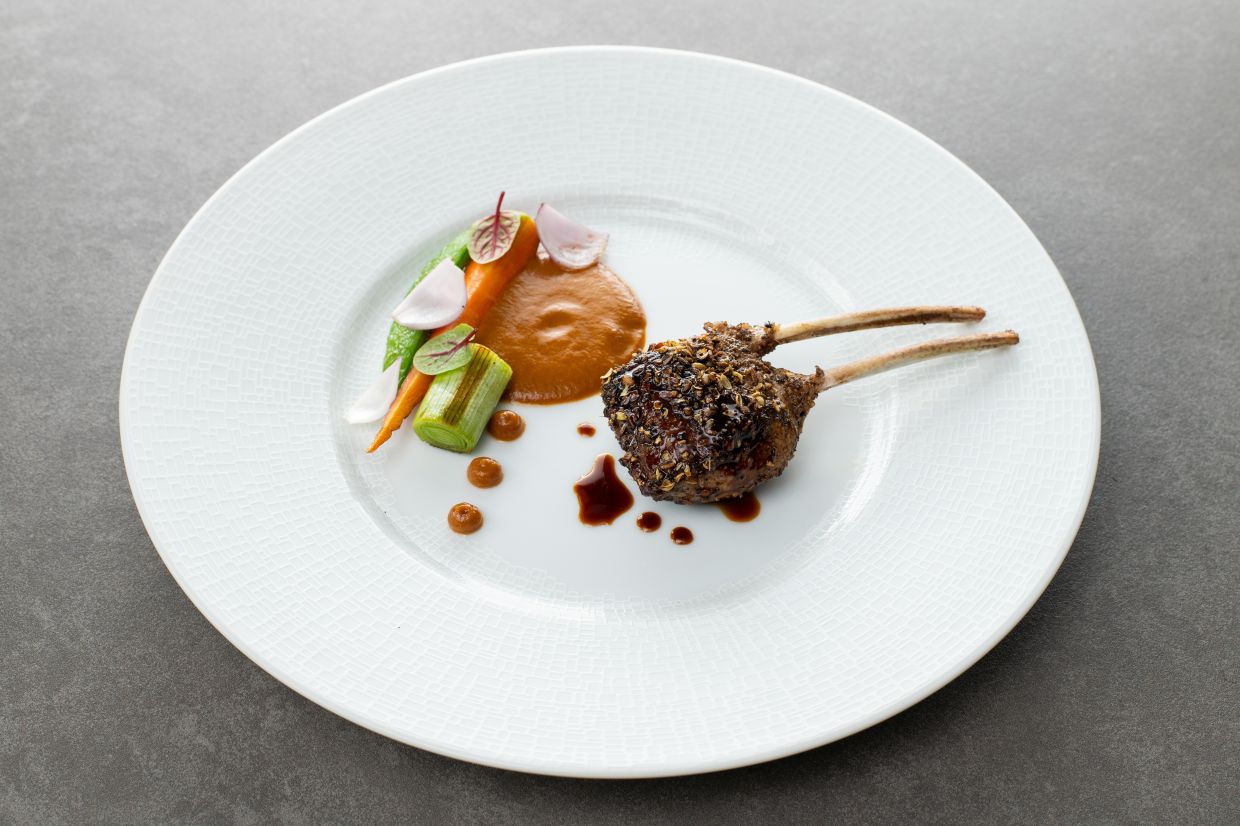 Nadodi delivers iterations of South Indian meals that will likely give you pause, simply because you’ve never eaten Indian food in quite this way before.

Born and bred in Chennai, India, Sri as he is better known, grew up in a strict Brahmin vegetarian household. He confesses that he was never very academically-inclined and was instead always a more creative-driven person.

He pursued a degree in hospitality management in India, before going on to work in top hotels like the The Oberoi in Mumbai as well as a few stand-alone restaurants. Sri is an inventive young chef who uses his childhood memories of growing up in south India to create refined, creative south Indian fare.Still, he always hungered for more. Through a convoluted chain of events – involving a futile trip to Bangkok to meet his hero Gaggan Anand who wasn’t even there, and eventually winning a photography competition where he got to meet his idol at a pop-up event in India – Sri finally scored a nearly year-long internship at the famed Bangkok restaurant.

“There were a lot of things that were good and bad there, but it was an experience that kind of helped to give me a different perspective to being a chef, ” says Sri of his time there.

It was while he was at Gaggan that the opportunity to come to Malaysia and be a part of the ground-breaking Nadodi team came about. Having never been to Kuala Lumpur, Sri was initially hesitant about the city’s dining scene but his instincts told him to jump at the opportunity, and so he did.

“I kind of grabbed it and said I would come and do a bit of R&D for the brand and that’s how we started. Within a year, I understood that Malaysia had a great Indian culture, people already knew what curries and thosai were, so it’s not something new that you are giving to the public. But it’s the approach, which is something new for Indian food, especially southern Indian food, ” he affirms.

Staying true to its roots

Nadodi has been open for three years now and Abbi says he no longer sticks his oar in as far as the menu goes. Instead, he lets the team give flight to their imaginations, the only caveat being that they stay true to the restaurant’s South Indian blueprint.

“My only thing is that we stick to our premise and don’t deviate from our initial direction. I want something that as South Indians, we can be proud of, and I don’t want it to slowly become Japanese or something like that.

“Most chefs think you need to infuse other culinary influences like French food into Indian food, they think that’s sophisticated, but our culinary culture is so much older than French culinary culture, ” says Abbi.

In many ways, Abbi and his team are fighting against very strongly held preconceived notions, especially in this part of the world where migrants from South India settled over a century ago, bringing their food with them. 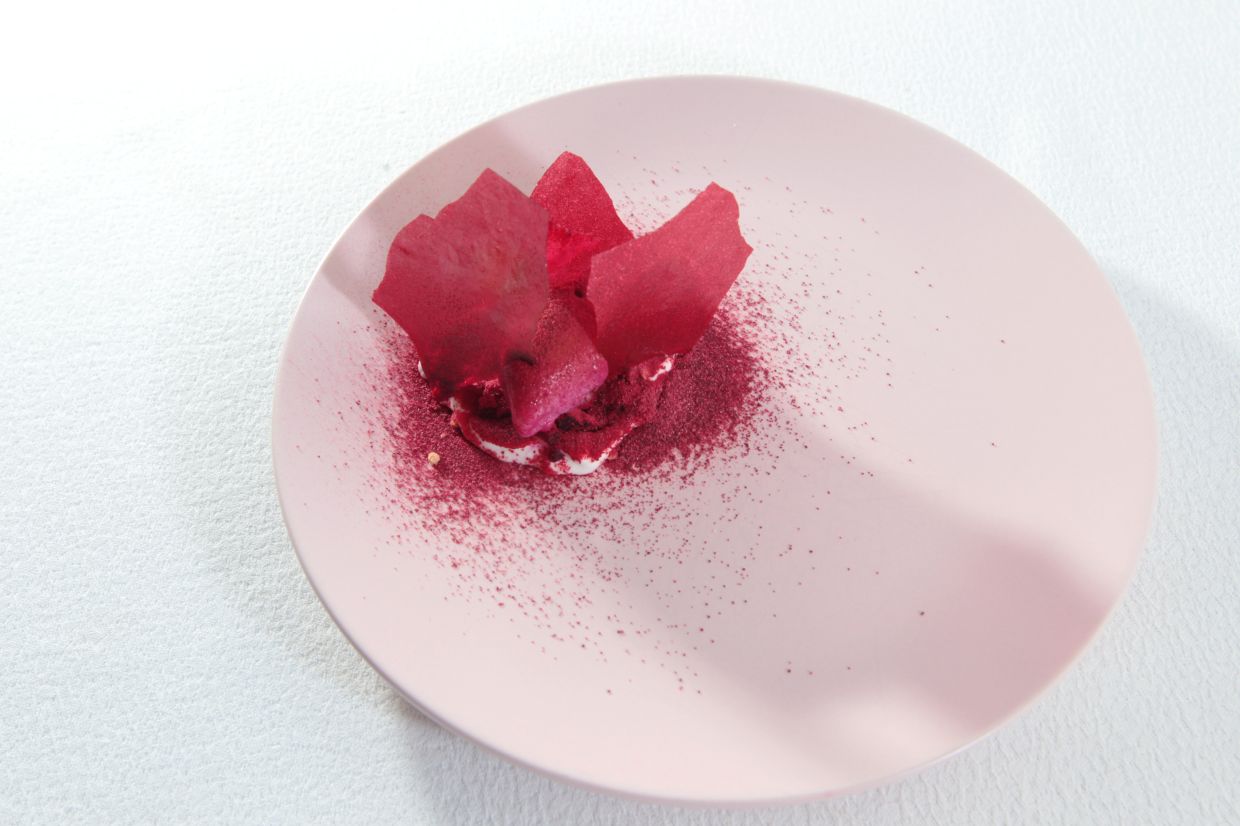 The red curry features beetroot cooked three ways, as a crisp, sorbet and pickled and is a dish on Nadodi's menu that pays tribute to a Sri Lankan dish. - ART CHEN/The Star

Most of these meals were affordable fare like thosai and idli, and so South Indian food became equated with “cheap eats”.

In the face of this, trying to convert people to the idea that South Indian food deserves a seat at the fine-dining table might seem slightly crazy, but the team has gone for it with conviction and enthusiasm.

This bold move is both timely and somewhat important. For one, it is always good to see the status quo challenged. More pertinently, it is extremely heartening to see South India – the part of India Time once called “the other India” – put on a pedestal for once.

“One of the first customers to Nadodi was a table of four people who said, ‘This is too expensive for Indian food. You can eat banana leaf for like RM20 each.

“That fired me up! What does this mean – too expensive? So if this was Japanese food, you would pay RM1,000 for some guy cutting up pieces of fish for you? You pay that and don’t say anything, but the effort behind this is so much more.

“But you know, I didn’t get deflated – we just kept going, ” says Abbi.

ALSO READ: A Rasam cocktail is the star of this Indian food-inspired bar menu 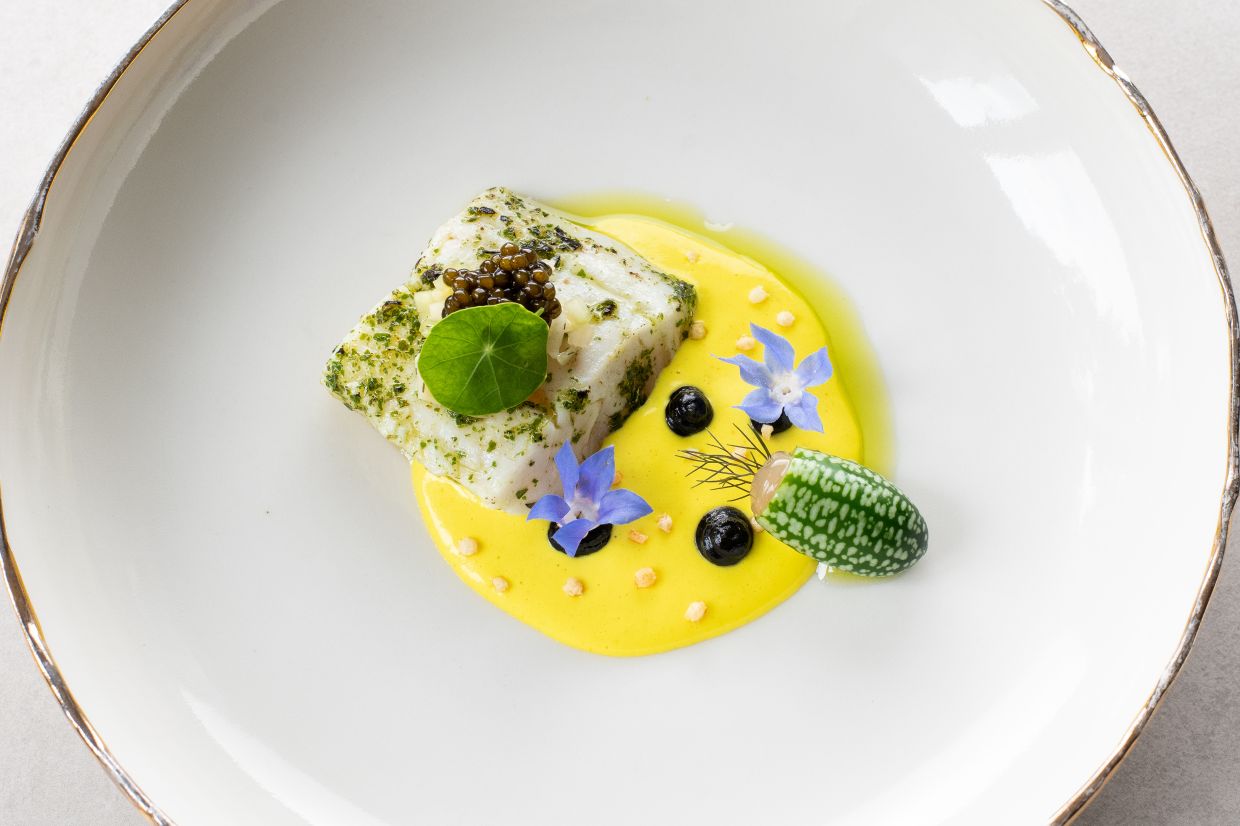 Since taking over two years ago, Sri has set about stamping his own mark on the food, taking inspiration from childhood memories of the food he grew up with. He also has roots in Kerala, as he is half-Malayalee, so there are some Kerala-style allusions in the food as well as Sri Lankan connotations, so although each meal has authentic flavours at its heart, nothing is quite like any configuration of South Indian food you are likely to have tried before.

“All those experiences I had in India are very nice to have as a reference point to everything. But I don’t believe in just replicating something.

“Like if you’re making a chicken curry, there’s no point in just having a chicken curry, it has to have some purpose, some reasoning to it, so we kind of play with flavours – we take southern Indian flavours and pair it with different ingredients locally and around the world, ” explains Sri. 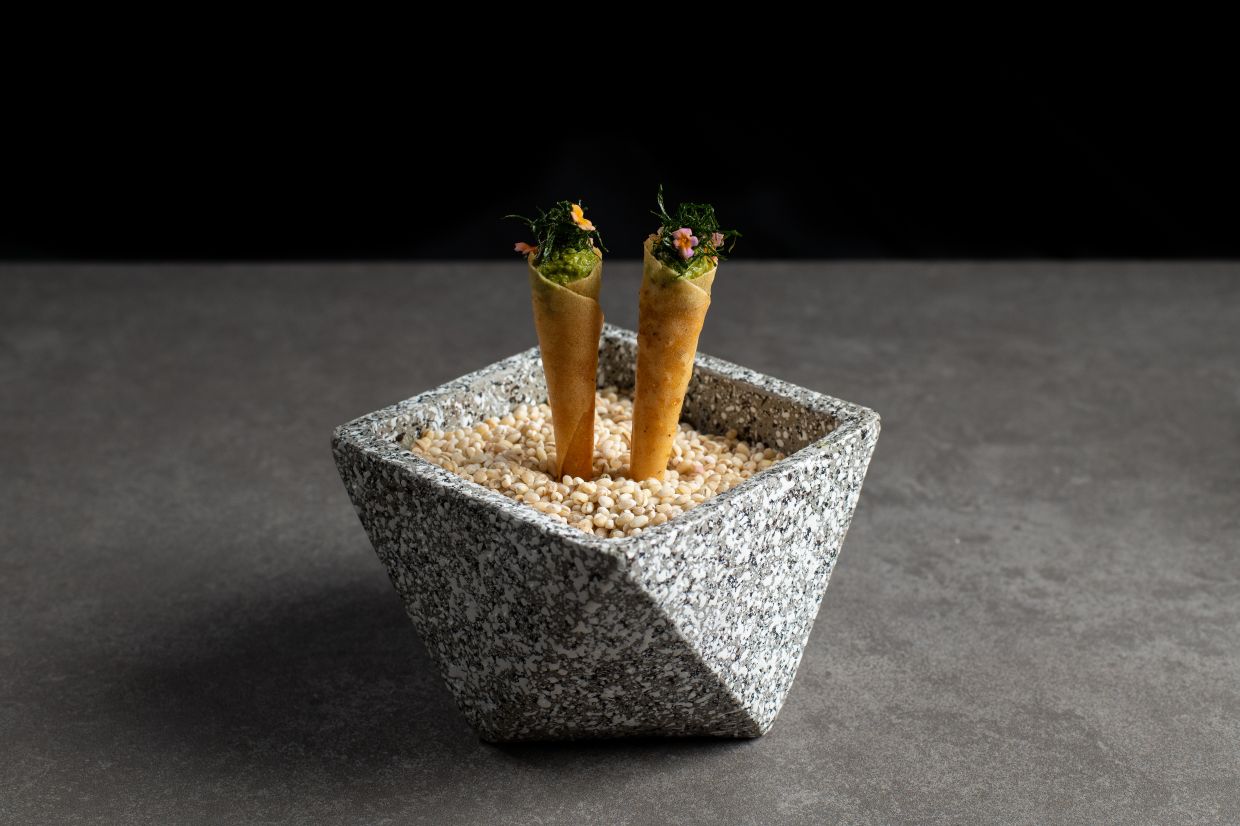 The miniature thosai delivers all the sensorial pleasures associated with crispy thosai in one perfect mouthful.

The tiny crispy thosai served as a snack for example, billed “the smallest thosai in the world” by Nadodi’s brand manager Kartik, is a cone studded with sambhar and coriander chutney. It delivers everything you would expect in a thosai in just one tiny bite.

This little bite precipitates much of what is to come in the Nadodi Experience Menu. There is for example, a dish like Shima Aji, which sees a piece of Japanese striped jack fish swimming in a sea of vatha kuzhambu, which is essentially a curry made with dried black nightshade berries.

“You will find this kuzhumbu in most Brahmin households. My grandma makes a very nice vatha kuzhambu, so I thought why not take something very Brahmin and introduce some fish and make it completely disastrous for the Brahmin?” says Sri, laughing.

The result is a wondrous riot of flavours – the fish which is tenderly yielding and cooked to perfection soaks up the flavours of the smooth pool of curry that offers lightly tart flavours that serve as a delightful mid-meal perk-me-up.

The Mathanga meanwhile has Malaysian-sourced pumpkin as a central figure and pays homage to Kerala’s famed erisherry (pumpkin cooked in coconut milk). In this incarnation, the creamy dish undulates with spices and is punctuated by the natural sweetness of pumpkin in what proves to be a soothing, sating meal.

Things move on to far more familiar territory with the Country Chicken short grain Biryani with accompaniments like raita. This bottomless dish (you can have as many refills as you like) is as traditional as it gets but is also one of the best iterations of biryani you’re likely to find anywhere. Each mouthful serves up the essence of the subcontinent and delivers a powerful flavour punch that will quite literally remain imprinted in your brain long after. Sri and his team endeavour to change 80% of the menu every month or so. According to him, sometimes new ideas get off the ground quickly while at other times, it takes a little more effort to perfect.

“And I never compare myself with other chefs anywhere in the world, because I feel once you start doing that, it affects your thought process and creativity and it doesn’t give you that freedom that you require. So I always tell my guys, ‘You just focus on what you want to do and do it irrespective of whether it’s a new idea or not a new idea or whether someone has done it or not, ’” says Sri.

He believes that the food he painstakingly puts together night after night is a form of art – each platter constructed to deliver bites of euphoria whilst also channeling memories that capture the integral DNA of the food of South India.

“I wouldn’t call it modern South Indian food, because this is my perspective – we are living in a modern age and everything around here is modern. Even in the house when we cook, it’s all modern cooking, we are not using the traditional fires or pots to cook.

“So I would rather term it as artistic in terms of showcasing food. So if a rasam requires four spices, these four spices will definitely be there in the rasam but it’s how you make the rasam that defines it. If I make the rasam in a single pot, then it’s a traditional way of making, but I use the oven to steam it, it’s a different approach, ” concludes Sri.

Oozing goodness of Juicy Lucy
Snickers candy bar now available as a seasoning in the US
Alcohol: Dangerous for the young, healthy for the old?
Bangi eatery stands out with signature crab dishes
Cool down with these desserts
Corner favourite attracts crowds across generations
The Black Thorn durian is gaining momentum over Musang King
Ordering in: Whipping up a sourdough bread storm
Ordering in: The toast with the most
Hotel ushers in Mid-Autumn fest with indulgent mooncakes