GE15: Saifuddin volleys back after Rafizi salvo over 5G rollout 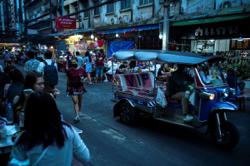 KUANTAN: The 5G rollout for Malaysia is actually a year ahead of schedule contrary to Rafizi Ramli's claims, says Datuk Seri Saifuddin Abdullah.

In rebutting the PKR deputy president's allegations, the former communications and multimedia minister said the Digital Nasional Berhad (DNB) special purpose vehicle was approved by the Cabinet and there was a tender process conducted by the Finance Ministry.

"When we were discussing models, there were various consultations with telcos.

"The Government took the decision to come up with this framework because we felt that it was the most practical," Saifuddin said when met on the campaign trail here on Monday (Nov 7).

He said the problem was that there were too many telcos for Malaysia's population.

"This is a legacy problem. Khazanah advised us to ask the telcos to merge, consultations were made but nothing came of it.

"We already had an issue in the past with the distribution of spectrum because it's so limited and we have to be fair," said Saifuddin.

During the Ayuh Malaysia ceramah here on Sunday (Nov 6) night, Rafizi said too many years had been wasted with DNB's single wholesale network model and Saifuddin, who held the communications and multimedia ministry portfolio at the time, had a lot to answer for.

Rafizi said it was known that there were concerns over a state-owned monopoly through which telcos had to sub-lease.

He said the normal model should have been to open up the spectrum for bidding and telcos would then be responsible for their infrastructure, which would speed up the 5G rollout.

Rafizi added that the delay in the 5G rollout had a big impact on everyone as it could hold back the economy.

Saifuddin said it was always the idea to open up ownership to the telcos.

"There are two parts to investor participation in the 5G rollout. The main tender was won by Ericsson in a fair and transparent process.

"During Ismail Sabri's tenure as prime minister, it was decided that telcos would be invited as investors in DNB.

"Rafizi does not know what he's talking about. I know for a fact that we are one year ahead in the 5G rollout process," he said.