KUALA LUMPUR: Finance Minister Tengku Datuk Seri Zafrul Tengku Abdul Aziz on Friday (Oct 7) announced good news for one million taxpayers among the middle-income (M40) households as proof that the government has never neglected the group and always strives to increase the disposable income that the group can benefit from.

When tabling the national budget or the Supply Bill 2023 in the Dewan Rakyat today, the minister said the individual resident income tax rate will be reduced by two percentage points for the taxable income range between more than RM50,000 up to RM100,000.

"With this special income tax treatment, tax savings for the middle-income group is now up to RM1,000 and for the top group is up to RM250. This means an estimated RM800mil is available as excess income for the people to spend,” he said.

Tengku Zafrul also said that the e-Pemula M40 initiative will be implemented, which is an e-wallet credit offer of RM100 to the M40 group with an annual income of less than RM100,000 to promote cashless payments.

"It is estimated that eight million individuals are eligible to claim this credit with an allocation of RM800mil,” he added. - Bernama 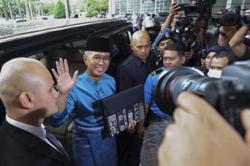