GELANG PATAH: More than 500,000 marine hatchlings worth RM1.3mil have been released into the wild by the Johor Fisheries Department since January this year as part of the state government's plan to ensure a sustainable environment in Johor.

“As of Wednesday (Oct 5), we have released 508,400 young freshwater and saltwater fish, crabs, and prawns into the open sea and rivers in all districts in the state.

“This is part of the state government's plan to ensure that our food source remains sustainable and the impact will give benefit to the local fishermen in terms of increasing their catch,” he said.

He said this when met after visiting the ikan siakap (barramunidi) fish farm in the Tebrau Straits, near Pendas Laut, here.

The programme is part of the annual activities done by the department to ensure that the state will have enough fish supply for generations to come, he said.

“It will take about three to six months for the hatchings to grow before they can be harvested and sold at the market, so this will ensure that there is a healthy cycle of biodiversity in our environment,” he explained.

Meanwhile, on the programme, Zahari shared that the initiative was done with collaboration from fish hatchery company Local Basic Sdn Bhd.

According to company manager Datuk Jason Teoh Sew Hock, his company has been releasing ikan siakap and ikan merah (red snapper) fry into the Tebrau Straits since October last year.

“We started small in our first phase where we released about 2,000 ikan siakap and ikan merah fingerlings before slowly going up to 10,000 hatchlings a month.

“Back then we used to buy the eggs from other hatcheries before we finally managed our own at Kampung Simpang Arang, where we could produce 40,000 hatchlings every month,” he said, adding that he plans to start a baby grouper hatchery next year. 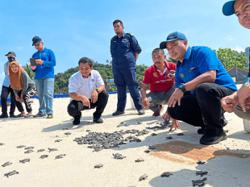