At peace: (Inset) Monks and devotees of the Dhamma Sakyamuni Caves Monastery with their counsel at the Ipoh High Court.

IPOH: The century-old Dhamma Sakyamuni Caves Monastery at Gunung Kanthan in Chemor – one of the last surviving limestone cave temples in the country – has been saved from demolition.

A cement company’s bid to evict the monks of the temple has been dismissed by the High Court here.

Judicial commissioner Bhupindar Singh Gurcharan Singh Preet dismissed the company’s Order 89 application to evict the monks after reviewing submissions by both parties in the courtroom.

When met outside the courtroom yesterday, monastery abbot Chiong Sai Tin said they were happy with the outcome.

“We are relieved that we can stay on at the monastery peacefully.

“We feel truly blessed. We have devotees locally and overseas who came to support us today,” he said.

“We will hold a special prayer to mark this day, and we hope the company will not come for us again.” Also present were about 20 other monks and devotees. The century- old monastery claims that in Gunung Kanthan in Chemor, Perak.

The company had filed the Order 89 application at the High Court in January last year to evict the monks by claiming that they were unlawful and unknown squatters.

The monastery’s spokesman, Leong Cheok Keng, who is also Malim Nawar assemblyman, said the house of worship has been there for a century and should be preserved.

“Special flora and fauna species can only be found on the hill.”

Geologists say there are many endangered species found in the five million-year-old limestone hills.

“We are happy with the verdict,” said Leong.

“The monastery has also declined to request costs from the plaintiff as this is of public interest. The plaintiff can still make an appeal or make a civil case, but we hope that they will leave the monastery alone.”

The monastery’s legal team was led by Chan Kok Leong while the company was represented by Nimisha Jaya Gobi and Vong Sze Xin. 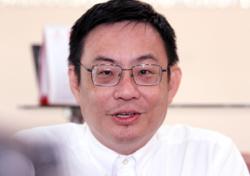