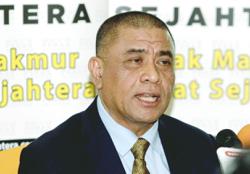 IPOH: The police have denied allegations that they roughed up a suspect till he sustained serious injuries in an incident in Seri Manjung, Lumut, which went viral on Twitter.

Manjung district police chief ACP Nor Omar Sappi said they discovered that a 28-second video had been uploaded on Friday (Aug 12) by Twitter user @MacSelvam showing two police personnel he alleged were roughing up an individual and causing serious injuries.

He said the account owner claimed that the police had roughed the individual up by hitting him with an object that looked like wood at a staircase of a building.

"Investigations revealed that the allegations are untrue and baseless. The police vehemently denies roughing up a detained suspect because after he was detained, the suspect was under the control of the police and fully cooperated,” he said in a statement tonight.

He said that based on CCTV footage, police confirmed the incident occurred in Seri Manjung after the police had conducted a raid on the suspect for suspected involvement in a drug case on Feb 10.

"When the raid occurred, the suspect escaped by jumping through the first-storey window of the building and sustained injuries to his ankle and he was arrested by the police and brought back to the building for further inspection.

"The police hit the stairs as a warning as they were concerned there were other accomplices hiding in the building,” he said.

Nor Omar said the police took such precautions to ensure the safety of the team during the raid as the staircase was dark, and reminded the public not to speculate about this incident to avoid causing confusion and public concern. - Bernama