PETALING JAYA: The government has initiated steps to better regulate the lucrative but poorly monitored beauty industry, which has indirectly caused the number of fake medical practitioners to increase.

Welcoming the move, medical groups and beauticians hope that beauticians who illegally provide dental and aesthetic procedures and courses can finally be reined in.

Deputy Domestic Trade and Consumer Affairs (KPDNHEP) Minister Datuk Rosol Wahid told The Star that the ministry and the Health Ministry (MOH) are engaging with stakeholders to discuss the plan.

Rosol said that at the moment, both ministries are seeking a middle ground as to what procedures can and cannot be offered by beauticians.

“Currently, we don’t have a law to regulate the beauty industry when it is growing rapidly, and people are earning handsomely from it.

“We are discussing with MOH to see what procedures the beauty parlours can offer and what they can’t.

“MOH is looking at it based on a few things: whether the practitioners are using equipment registered under the Medical Devices Authority, possible effects of such procedures and whether they are invasive or non-invasive.

“If it is a non-invasive procedure, then it will fall under the purview of KPDNHEP,” Rosol said, adding that ascertaining whether a procedure is invasive or not is not an easy task.

ALSO READ : ‘Procedures to be done only by qualified individuals’

Many have raised concerns over the abundance of beauty parlours and beauticians offering aesthetic and dental services such as braces and veneer procedures, whitening drip and platelet-rich plasma therapy.

A few botched cases have been reported where patients were either scarred for life or died.

Using “cosmetics or for beauty” to justify their offerings, some beauticians also conducted short courses for those wanting to acquire such skills.

In July, The Star reported that from RM1,000 to RM3,000, anyone could participate in various short courses such as installing braces and veneers and performing whitening procedures with a certificate and starter kit at the end of the courses.

Commenting on this, Rosol said action could be taken against those who provide illegal short medical courses as the certificates issued are invalid.

“The authorities should come down strongly on these (unqualified) practitioners and trainers,” he said.

Dr Koh said once the regulation is in place, the government should also organise public awareness programmes to educate the public, especially in identifying unlicensed or uncertified beauty centres.

“When unqualified trainers train the people, it is like the blind leading the blind. We should not allow people to provide training that can harm others,” he said, adding that there is also a need to empower the public with oral health knowledge.

“Medical procedures can only be done by medical doctors.

“During the previous engagement between the stakeholders, some of them portrayed lasers as harmless but we told them no, they are dangerous and could harm others.”

Only about 300 doctors in the field of aesthetics and beauty treatment are accredited under the MOH.

‘Procedures to be done only by qualified individuals’ 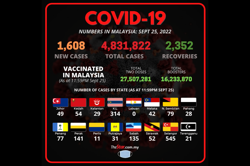