JOHOR BARU: Eight businesses in Johor have been issued compound notices for various offences related to the sale of chickens, eggs and cooking oil.

State Domestic Trade and Consumer Affairs Ministry director Mohd Hairul Anuar Bohro said a total of 1,079 premises including retailers, suppliers and manufacturers have been subjected to spot checks since June 23, as part of the ministry’s efforts to weed out those who violated the law.

“During the operations period, we received eight complaints and our personnel conducted investigations and issued compound notices to them on the spot worth a total amount of RM4,500.

“Strict actions will be taken against any retailers who sell controlled items beyond the ceiling price set by the government, fail to visibly display the price of their as well as for failing to place special pink price tags on the controlled items,” he said in a statement on Friday (July 1).

The compound notices were issued under the Price Control and Anti-Profiteering Act 2011 and the Control of Supplies Act 1961.

He added that the ministry has not received any complaints in Johor so far regarding the new chicken ceiling price of RM9.40 per kg that was introduced on Friday (July 1).

“The chicken, eggs and cooking oil operation is ongoing until July 31, with the objective of ensuring the stable supply of the items.

“We also want to make sure the traders are not hoarding the controlled items and essential goods during this period,” said Mohd Hairul.

Those with complaints can get in touch with the various channels including via the ministry’s call centre at 1-800-886-800, or by email at e-aduan@kpdnhep.gov.my. 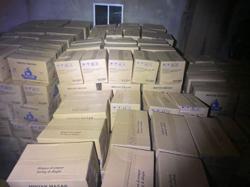