The Transport Minister said Low's suggestions were, among others, aimed at resolving the issue of foreign worker recruitment, inflation control, and food security.

"Low has shared four of ACCIM's suggestions to be considered for inclusion in the 2023 Budget, which will be tabled by the government soon.

"Among them are solutions to recruitment issues, inflation control and issues related to food security," he said in a Facebook post Saturday (June 25).

The MCA president also shared a few pictures of the event on his Facebook page. 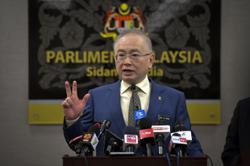 Social media influencer: ‘It’s not a viable career’
Despite lure of money and fame, teens say education vital for future
The unseen costs of being a virtual influencer
Dr Wee: Good record-keeping and identification of history important for associations
Ahmad Zahid: Highlighting LCS issue might affect national security secrets
Company MD gets 10 years' jail for umrah package fraud
Work with Umno for a better shot at winning seats in GE15, Kuala Nerus MP tells PAS
Man who gave vape to baby had statement recorded by police
Automated entry system at KLIA to be extended to foreigners
Search and rescue operation called off after body of 10-year-old found