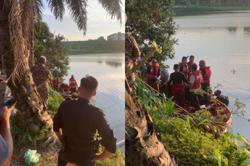 KLANG: A 14-year-old boy drowned at the Sungai Kembung fishermen's jetty in Pulau Indah Sat while playing in the river.

Selangor Fire and Rescue Department director Norazam Khamis said the victim, who did not know how to swim, had gone to the jetty with two friends aged 10 and 15.

"The three youngsters were washed away. One was rescued by the public and another managed to swim to safety," said Norazam.

The Fire and Rescue Department was notified and teams from Port Klang and the state's water rescue unit rushed to the scene to search for the victim.

Fire engines arrived at the scene at 1.40pm and managed to retrieve the victims' remains at 4pm, said Norazam.

"The victim was confirmed dead by Health Ministry officers at the scene," he added.

Norazam said the victim's remains were handed over to the police for further action.