PETALING JAYA: Two Malaysians and an Indonesian currently detained at Guantanamo Bay detention camp in Cuba have scored a minor victory in their terrorism trial as the court has accepted their claim that their Bahasa Malaysia and Indonesian interpreters were biased and incompetent.

During the arraignment on Aug 30 and last year, Malaysians Mohammed Nazir Lep and Mohammed Farik Amin alongside Indonesian Encep Nurjaman - more commonly known as Hambali - had refused entering a plea and cited their interpreters as displaying bias and incompetence, saying that this resulted in inaccurate translations.

Following the decision, the trio requested for the US military court to provide a fresh arrangement with new interpreters at the helm before entering their pleas, reported news portal Free Malaysia Today.

Subsequently, the US government was ordered to make a submission for an updated interpreter support plan by February as the hearing was scheduled to be held from Feb 28 to March 4.

Military judge Hayes C Larsen said the current plan was to identify at least two interpreters for each language while also being able to support the court during the hearing either from the Guantanamo Bay Naval Station or remotely from the national capital.

“The interpreters will possess appropriate security clearance while also being screened for potentially disqualifying work histories," he said.

“The government will also coordinate with the Office of the Military Commission for an analysis of the Malaysian interpretation during last year’s hearing by an independent interpreter before Feb 8, 2022,” added Larsen.

He said that the identified Bahasa Malaysia interpreter for the next hearing would be the same as previously as the state had once again proposed for the use of only one interpreter for each language.

Larsen said this was inadequate and that the government would identify two interpreters per language for future hearings.

“The defence has until Feb 8 to file any objections to the interpreters identified by the government in its support plan,” he said.

Larsen added that the Malaysian interpreter identified by the government for the next hearing was the same interpreter used in the last one, adding that the state had proposed once again to use only one interpreter for each language.

When contacted, Nazir’s lead counsel Brian Bouffard said that the defence was pleased as the commission would now be taking the issue more seriously alongside having a transparent view of the situation.

“That is a minor victory by itself. We also continue to believe that a proper arraignment has not yet occurred in this case hence all future hearings would be null and void unless this problem is fixed,” said Bouffard in an email.

He added that the US would have to respect the rule of law in due time and that he would arraign his client correctly while also recognising his human dignity and legal rights.

When asked about Nazir’s state of mind, Bouffard said that Nazir, who has been incarcerated in solitary confinement for close to 19 years, was grateful that the world has not forgotten him or those held together with him

“He wants a fair trial and to come home to his family in Malaysia as soon as possible. We also deeply appreciate the efforts of the Malaysian government to make this happen,” said Bouffard.

All three suspects face eight charges with seven related to the twin bombings that killed 202 people in Bali in October 2002, along with a bombing at the JW Marriott hotel in Jakarta in August 2003.

The trio were arrested in Thailand in 2003 and sent to a secret CIA-operated “black site” before subsequently being moved to the military prison at Guantanamo Bay in 2006. 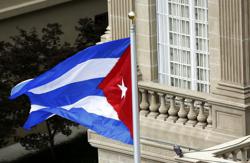