GEORGE TOWN: Condolences have poured in for Royal Malaysian Air Force (RMAF) pilot Kapt Mohamad Affendi Bustamy (pic) who was killed in an aircraft crash at its base in Teluk Ayer Tawar, Butterworth.

The incident involved a Hawk 108 plane on Tuesday night.

The King and Queen expressed their sadness over his demise and hoped that his family would be patient and resilient during this difficult and sad time.

“His Majesty, who is the supreme commander of the Malaysian Armed Forces, greatly appreciates the services of the late Kapt Mohamad Affendi to RMAF and the country.

“The passing of the late Kapt Mohamad Affendi is a great loss to the RMAF and the country.

“Their Majesties pray that his soul is blessed by Allah and placed among the righteous. Solemn: Kapt Mohamad Affendi’s wife (in purple), his sister (in black) and other family members being escorted to Seberang Jaya Hospital to see the body of the deceased. — LIM BENG TATT /The Star

“Their Majesties also pray that his co-pilot Mej Mohd Fareez Omar, who was injured and is currently being treated at the Seberang Jaya Hospital, would be granted an immediate recovery,” according to a statement from Istana Negara yesterday.

“My condolences to the family members of late Kapt Mohamad Affendi Bustamy who was killed in the Hawk 108 plane incident in Butterworth.

“I pray that his soul will be blessed by Allah and placed among the righteous,” he wrote.

In a Facebook post, Hishammuddin sent his condolences and prayed that the soul of the deceased be showered with the blessings of Allah SWT.

“Hopefully, the family members persevere in facing this difficult test,” he said.

‘Decision to ground jets up to Armed Forces and RMAF’ 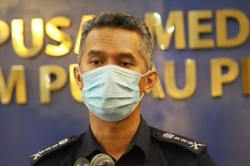