PETALING JAYA: Phase One of the Langat 2 water treatment plant and its distribution system (LRAL2) did not achieve their objective of supplying 1,130 million litres per day (MLD) of treated water to areas in Selangor and Kuala Lumpur.

According to the Auditor-General’s Report 2019 Series 2, the lack of treated water supply to the northern and western corridors was due to delays in the project.

“The performance of the LRAL2 project was unsatisfactory and the project management was inefficient.

“This is due to significant weaknesses at the project planning stage involving delays in finalising the restructuring exercise in the water services industry,” the report noted.

While there were eight packages under the project that have been completed and certified, the A-G’s report said 12 others are still under construction and three have yet to start.

“Based on the audit sample, a total of 59 extensions were issued for 14 packages and 128 work-change instructions for 13 packages were issued to contractors due to weaknesses in project planning,” it added.

Since the completed components of the LRAL2 project have not been fully integrated, the report noted that the full operation of its water pumps, generators, transformers and the Supervisory Control and Data Acquisition (Scada) system cannot be ascertained according to specification.

The report also highlighted that the delay in the approval of the land acquisition and alienation to the Federal Land Commissioner by the state authority led to an increase in the cost of the land.

This cost an expenditure of RM2.853bil, which exceeded the original RM2.1bil estimated allocation approved by the Cabinet for Phase One.

The report has called for the Environment and Water Ministry to monitor the water distribution system work progress according to the set time period as an improvement action.

Following the delay in the LRAL2 project, the report noted that the targeted distribution of 1,890 MLD from Pahang to the Klang Valley under the Pahang-Selangor Raw Water Transfer Project also fell through.

The project, which is among the solutions to have a clean water supply in Selangor, Kuala Lumpur and Putrajaya until 2025, has been delayed.

The report revealed that the capacity of raw water distribution from Pahang to Selangor only achieved 623 MLD for six months until 2020.

“In general, the implementation of the water transfer project is satisfactory. But coordination has to ramp up among the ministry, Pahang and Selangor state governments, as well as relevant departments and agencies,” the report added.

It also pointed to other issues that need thorough planning and action although the project has been completed.

“The ministry should improve management methods in future projects, such as ensuring the ownership and reservation of land are finalised before project completion, so that the ownership transfer of infrastructure projects to receiving agencies is not affected,” said the report.

The water transfer project from Pahang to Selangor was part of a long-term solution to the increasing demand for clean water in the Klang Valley.

Its implementation is divided into two main parts: the supply of raw water through a 44.6km tunnel to the Langat 2 water treatment plant project and the LRAL2. 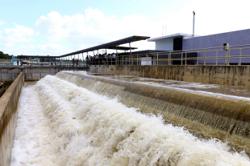