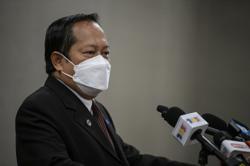 Justice Ahmad Shahrir Mohd Salleh made the order of a discharge and acquittal here on Wednesday (Sept 29) after the court was informed that the prosecution was withdrawing its case against the Pontian MP.

He said when the prosecution exercised its powers under Section 254(1) of the Criminal Procedure Code to not further prosecute an accused, it was the duty of the court under Section 254(3) of the same Code to consider whether the accused should be given a discharge not amounting to an acquittal or an outright acquittal.

This discretion, Justice Ahmad Shahrir added, must be judicially exercised by the courts.

"On the other hand, the court cannot insist that the prosecution proceed with the case against the accused if the prosecution decides to withdraw the charge. This is the position of the law," he said in his decision.

The court also noted that the prosecution had confirmed that the accused would not be made to face the same charge in the future.

"This stems from the fact that the accused has accepted the offer to compound and had duly paid the compound.

"I hereby order the accused to be acquitted and discharged of the first and second charges," the judge said.

He asked the court to grant a discharge not amounting to an acquittal against Ahmad but this was objected to by Ahmad's lawyer Hamidi Mohd Noh who sought for a full acquittal.

In a statement issued by law firm Messrs Shahrul Hamidi & Haziq, it said the settlement and compound was agreed by the prosecution and the defence.

"This settlement is not tantamount to a guilty plea.

"It was done according to the law and has gone through a transparent and orderly process," it said.

The statement further said that the settlement was solely for the purpose of the case and had no relation to any political or external factors and it did not involve other individuals or agencies apart from the investigating agency and the prosecution.

It also stated that the RM1.1mil compound was paid through help and loans from Ahmad's friends who have been supporting him.

Ahmad was accused of violating Section 113(1)(a) of the Income Tax Act 1967 by not stating his real income on the RM2mil he received from former prime minister Datuk Seri Najib Razak in the Income Tax Return Form for Assessment Year 2013.

He allegedly received the money, believed to be proceeds of illegal activities, via a cheque from AmIslamic Bank Berhad dated Nov 27, 2013, which he personally cashed on the same day.

The offence was allegedly committed at the Inland Revenue Board (LHDN), Jalan Tuanku Abdul Halim, on April 30, 2014.

The other charge was for giving false statements to the MACC when questioned by investigating officer Mohd Zairi Zainal over the issue at the media conference room, at the Parliament building between 2.45pm and 3.30pm on July 4, 2019.

The charge, framed under Section 32(8)c) of the Anti-Money Laundering, Anti-Terrorism Financing and Proceeds of Unlawful Activities Act 2001, provides a maximum fine of RM3mil, or imprisonment for up to five years, or both if found guilty.