PETALING JAYA: Tributes and messages of condolences have poured in for former chief secretary to the government Tun Ahmad Sarji Abdul Hamid (pic) who passed away aged 82 early Saturday (Aug 28).

Ismail Sabri said that the “Malaysian Family” lost an icon who was both respected and admired, as Ahmad Sarji was synonymous with many initiatives to enhance the image and effectiveness of the public service.

He also said that Ahmad Sarji was committed to contributing his ideas and expertise to the education sector after retirement as well as upholding Islamic teachings in the country.

“He was a statesman and his passing is a big loss to the country. May his service to the country be engraved in Malaysian history,” he said in a Facebook post.

Muhyiddin said that Ahmad’s Sarji death was a big loss not only to his family, but the whole country.

He said that during Ahmad’s Sarji’s tenure as chief secretary to the government, he supported the concept of Total Quality Management (TQM) to improve the effectiveness of the public service delivery system by focusing on customer satisfaction and continuous quality improvement.

“Personally, I knew him as an individual who was stern and dedicated to every trust placed on him. He was brave and outspoken, firm in decision making, trustworthy in service, and highly disciplined. His modest and approachable appearance made him highly respected and highly regarded by the community,” he said in a Facebook post.

Former Suhakam commissioner and Congress of Unions of Employees in the Public and Civil Services (Cuepacs) president Datuk Siva Subramaniam said that Ahmad Sarji was highly committed to the Malaysian public and made sure that most of the rakyat’s problems were solved.

Siva said that Ahmad Sarji met union leaders whenever they needed his help.

“He was highly committed to his job and his office was open to people regardless of their status. Cuepacs and Suhakam were frequent visitors to his office. He was a man of integrity and commitment, and his death is a great loss for the nation,” he said.

Dr Farhan Nizami, who is Prince of Wales Fellow and Oxford Centre for Islamic Studies director, also paid tribute to Ahmad Sarji for his distinguished service.

"For us at Oxford, Tun will always be remembered for his encouragement and support for the work of the Oxford Centre for Islamic Studies. We had been fortunate to have Tun as a member of our Board of Trustees for well over two decades."

"He served with great distinction and commitment and his wise counsel will be sorely missed,” he said in a statement.

On Aug 7, Ahmad Sarji was admitted to the intensive care unit of Hospital Cancelor Tuanku Muhriz (UKM) in Cheras due to complications from Covid-19.

Ahmad Sarji was the chief secretary to the government from 1990 to 1996 during the administration of Malaysia's fourth prime minister Tun Dr Mahathir Mohamad. 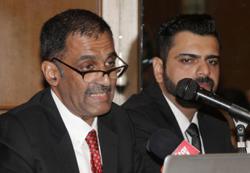