This comes after a statement from Istana Negara stating that Yang di-Pertuan Agong Al-Sultan Abdullah Ri'ayatuddin Al-Mustafa Billah Shah has expressed utmost disappointment with the statement made in Parliament last Monday that the government had revoked all Emergency Ordinances under the ongoing emergency without His Majesty’s consent.

It said the King was also very disappointed that His Majesty’s decree to Minister in the Prime Minister’s Department (Parliament and Law) Datuk Seri Takiyuddin Hassan and Attorney-General Tan Sri Idrus Harun for the proposed revocation of all the ordinances to be tabled and debated in Parliament had not been carried out.

Members of the media have been flocking to Prime Minister Tan Sri Muhyiddin Yassin’s residence in Bukit Damansara here since 1pm following the statement issued by Istana Negara regarding the revocation of the Emergency Ordinances. - Bernama 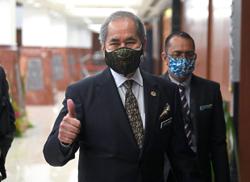