The Port Dickson MP said that the country has been thrown into a constitutional crisis and demanded the Prime Minister's resignation.

"We have a government that insults the King and an Executive that lies to the Parliament and the people.

"This statement clearly shows that the Cabinet led by Prime Minister Tan Sri Muhyiddin Yassin has gone against the Constitution and insulted the royal institution, particularly the King.

“We have no choice but to demand the Prime Minister step down,” he said.

He then proceeded to read out the whole statement from Istana Negara. 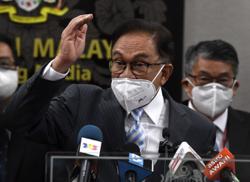