PRIORITY ON SHORING UP SMEs

A healthcare personnel taking a Covid-19 swab sample from a worker. Employers maintain that the source of workplace infection is usually external. – K.K. SHAM/The Star

THE term “workplace cluster” insinuates that factories are a hotspot of coronavirus infection but employers have pointed out that these places are not Covid-19 ground zero.

Employers reiterate that the source of infection is usually external, brought in to production plants from outbreaks and sporadic cases in the community outside.

Strict adherence to standard operating procedures is practised at the workplace, said the employers as they don’t want to risk their permit for production revoked or operations suspended.

“In addition, it is evident from data released by the Health Ministry that 398,846 of the total 578,105 or 69% of Covid-19 cases recorded this year until June 19 were sporadic cases detected in the community and should not be associated with any existing cluster.

“With the virus in the community, it can easily enter factories especially through asymptomatic cases despite all the SOPs and preventive measures at the workplace.

“These sources of infection are often not traced back to the community,” he said, but instead the workplace is held as the point where the infection started.

Once a worker is confirmed positive, more workers will be tested to arrest further infection. “This becomes classified as a workplace cluster by the authorities – giving rise to the misconception that the workplace is the primary source of infection,” said Soh. 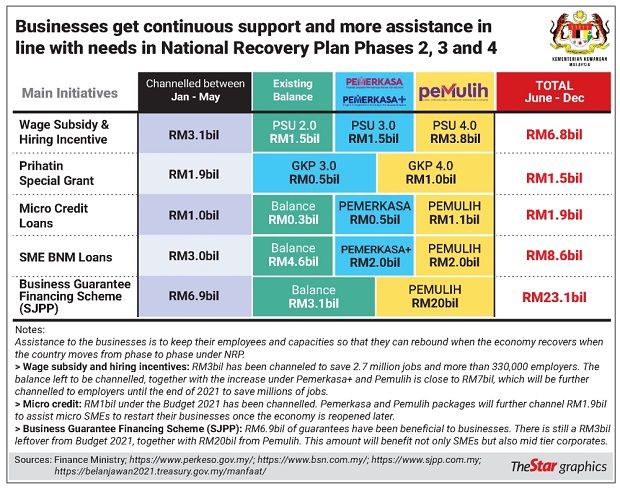 Still, workplace outbreaks have led to halts in production and that is why the Government’s financial packages collectively worth RM530bil are mostly focused on businesses – namely essential sectors, and small and medium size enterprises (SMEs).

Despite entering the pandemic on a weak financial footing due to decades of fiscal impropriety and weak management, overspending, over-borrowing and financial imprudence under previous administrations, the Government implemented such economic packages to cushion the current situation’s impact on businesses and the rakyat.

In Malaysia, SMEs make up the backbone of the economy.

According to the Department of Statistics, SMES contributed 38.9% to the GDP and 48.4% to employment in Malaysia in 2019.

The Government ensures that ample support is given to SMEs which are usually the first to fold in an economic crisis.

One-off grants were provided to SMEs in amounts of RM1,000 to RM3,000, combined with loan moratoriums and wage subsidies.

All SMEs enjoyed automatic six-month loan moratorium under Prihatin, while micro enterprises got a further six months under Pemulih.

The Finance Ministry has told commercial banks and other financial institutions to render assistance to affected businesses by allowing them to restructure their loans or defer payments, to ensure SMEs have sufficient financial liquidity.

A proper restructure of corporate and individual debts via loan moratoriums has been regarded as the more practical route to take, so that there is cash flow for the SME which otherwise would have to shut down.

The Wage Subsidy Programme which has been running for more than a year has enabled many Malaysian employers to retain their workers.

The programme serves SMEs that suffer at least a 30% decline in income. It pays out to the SME a wage subsidy of RM600 per month for each of its employees who earns a monthly salary of less than RM4,000 – for up to 500 workers per SME.

In the first scheme under Prihatin, the wage subsidy was up to RM1,200 per person, and the RM4,000 salary cap was discontinued under Pemulih.

As such an SME with 500 workers would received a subsidy of RM300,000 per month for 13 months, while in selected industries SMEs could receive an additional six months of wage subsidies.

The following are scenarios of how the Wage Subsidy Programme benefits a small SME (defined by SME Corp as a business with sales of RM300,000 to RM15mil a year, or five to 75 employees) and a large SME (there is no definition by SME Corp).

Loan size: RM10mil (RM8mil term loan for five years and RM2mil in revolving credit, both at 4.5% per annum)

Loan size: RM150mil (RM120mil term loan for five years and RM30mil in revolving credit, both at 4% per annum) 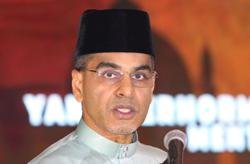