GEORGE TOWN: A 35-year-old kuih seller has been charged with the murder of a police constable who was killed while on duty.

Mohd Arraffat Taufik nodded his head when the court interpreter read out the charge in Bahasa Malaysia.

No plea was recorded after the charge was read to him before magistrate Jamaliah Abd Manap.

Based on the charge sheet, Mohd Arraffat is charged with causing the death of 22-year-old constable Muhammad Iqbal Mazlan between 1am and 2am on April 17 along Jalan Utama.

Mohd Arraffat is said to have been riding his motorcycle in a dangerous manner and sideswiped Muhammad Iqbal’s motorcycle, causing him to skid, fall and hit his head on the pavement.

Muhammad Iqbal died on the spot.

Mohd Arraffat is charged under Section 302 of the Penal Code for murder, which carries the death penalty upon conviction. 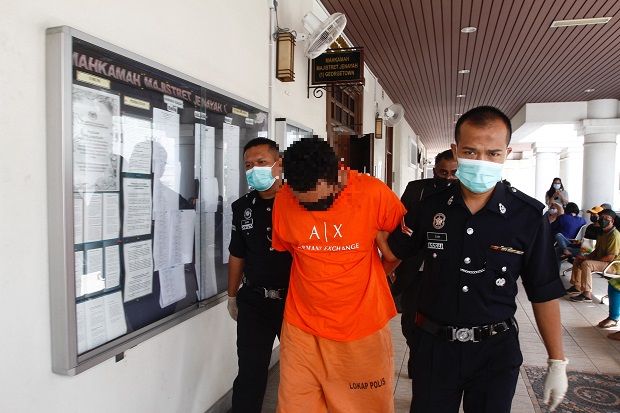 Mohd Arraffat Taufik (centre) has been charged with causing the death of constable Muhammad Iqbal Mazlan on April 17 between 1am to 2am along Jalan Utama in George Town, Penang.— ZHAFARAN NASIB/The Star

It was reported last week that George Town OCPD Asst Comm Soffian Santong said Muhammad Iqbal and two other policemen were on patrol near Jalan Scotland when they spotted a man riding a motorcycle in a suspicious manner.

He said when ordered to stop, the man sped off and rode in a dangerous manner, including riding in zig-zag to avoid capture.

“The three policemen gave chase until Jalan Utama. It was here that the man sideswiped Muhammad Iqbal’s motorcycle, causing him to skid, fall and hit his head on the pavement.

“He died at the scene, ” he said, adding that other policemen managed to apprehend the man.

“Further checks showed the man had a criminal record with six drug-related offences and five criminal offences, ” he said.

Muhammad Iqbal, who was from Besut, Terengganu joined the police force about 18 months ago.