Saifuddin said that as someone who has known Dr Xavier for a long time, the latter’s actions and excuse have raised queries.

“However, what differentiates a true reformist from the others is the strength when facing the challenges in good and trying times, ” said Saifuddin in a statement on Saturday (March 13).

Saifuddin also alleged that the Kuala Langat MP had informed PKR leaders recently that the Malaysian Anti-Corruption Commission (MACC) made him a target of investigations after the anti-graft agency detained his personal assistant and some acquaintances in relation to a recent case.

“Dr Xavier was apparently contacted later by a senior (Perikatan Nasional) Minister who told that he needed to support Perikatan or face serious repercussions," said Saifuddin.

“PKR is a reformist party, our stance is very clear in fighting corruption, abuse of power and going against the laws regardless of the positions, ” he added.

Saifuddin said the latest incident also affirms his opinion that there are efforts by the Perikatan government to gain the support of Opposition MPs by using baits and threats via the police, Internal Revenue Board and MACC.

Saifuddin claimed that authorities such as the MACC are now being used by senior politicians in Perikatan to shift support of Pakatan Harapan lawmakers towards Perikatan.

He also urged all PKR MPs to remain calm and united against such threats and temptations. 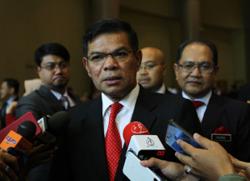