Glad to be back: Many movie-lovers were more than happy that cinemas could open their doors once again and they did not mind the strict SOP. — ART CHEN/The Star.

KUALA LUMPUR: Hungering for some silver screen magic, movie-lovers thronged cinemas on the first day of their reopening, keen to catch up on long anticipated shows.

Many were careful however to keep a distance from others as they bought tickets and snacks before heading into cinema halls.

At cinemas like GSC in MidValley Megamall, staff were seen making sure that cinema-goers followed the standard operating procedure (SOP), such as wearing face masks and checking in with their MySejahtera app.

Tickets for movies like Wonder Woman 1984, and anime hits Stand By Me Doraemon 2 and Demon Slayer: Kimetsu to Yaiba the Movie: Mugen Train were either sold out or selling fast, suggesting brisk business on the first day of the reopening under the conditional movement control order.

Student Russell Kong, 19, was one of those happy to go to the cinema again as he could finally catch Demon Slayer.

“I’ve been waiting since last December and inadvertently found out the ending from online forums. But it doesn’t matter because now, I get to watch the whole movie, ” he said.

Kong, who was at the cinema with his friend Yong Hsiang Yoong, also 19, said he was also keen to catch Raya and the Last Dragon on the big screen for his next visit.

Another movie buff, Khuzainy Mohd Zainuddin, 21, was happy to get out of the house and socialise again.

“I was starting to get bored being stuck at home and this is my first time out in a long time.

“I hope that the pandemic will come to an end soon so that we can go back to normal, ” she said.

Cinema supervisor Natasha Othman said her staff had been busy since the start of the business day.

She said she hopes patrons would strictly follow the SOP and do their part to curb Covid-19.

“We’ve taken steps by sanitising the halls and making sure patrons from different households sit one seat apart, ” she said, adding most people were cooperative. 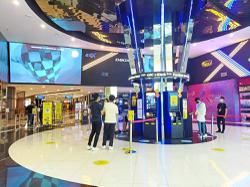