KUALA LUMPUR: A factory worker's dream of owning a car came to an abrupt end after she lost her life in the MRR2 bridge collapse here on Wednesday evening.

Nuriana Edwin Abdullah, 47, along with her collegue Norhayati Abdullah, 42, died at the scene.

Nuriana's brother-in-law Muhammad Raffidin Mohd Jufri said on Thursday (March 4) they were told of the accident after a car company saleman contacted a family member in Balakong.

“We last met three days ago when she came over to have a meal. She had been saving up for a car, ” he said when met outside the Hospital Canselor Tuanku Muhriz (HCTM) mortuary.

He added that Nuriana will be buried in Lundu, Sarawak, after a post mortem is completed.

On Wednesday (March 3), a trailer lorry collided with the scaffolding of the unfinished bridge along the MRR2 Highway near Bandar Tasik Selatan.

That led to the bridge collapsing and crushing a van transporting factory workers.

It took rescuers almost four hours to extricate all five people from the van.

The driver of the lorry has since been remanded for four days. 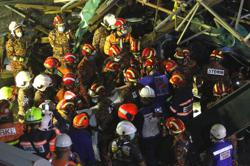