KUALA LUMPUR: Two of the five people trapped inside the van that was crushed by a collapsed bridge died at the scene.

City Traffic Investigation and Enforcement Department chief Asst Comm Zulkefly Yahya said that the two who died were female factory workers and added that all the victims were locals.

He said that the van carried factory workers and it is believed that they were on their way to work.

On the trailer lorry believed to have hit a portion of the SUKE Highway bridge that collapsed, ACP Zulkefly said that its driver would be detained.

"A report has been made at the Sungai Besi police station," he said at the scene along the MRR2 Highway near Bandar Tasik Selatan.

ACP Zulkefly added that it was carrying metal items and was not overloaded at the time of the accident.

"Perhaps the collision was due to technical reasons. It had its own escort vehicles that went ahead of it. How the collision occurred exactly is still under investigation," he said.

He had said earlier that a trailer carrying heavy machinery is believed to have hit a portion of the bridge currently under construction.

Kuala Lumpur Fire and Rescue Department chief Nordin Md Pauzi - who was also at the scene - said that the department had to act carefully to ensure that the structure of the wreckage remained intact while rescue efforts were ongoing.

"This led to it being time-consuming because we had to ensure that those being rescued were not crushed further. So several tools had to be used to support the rescue.

"With the help of the construction site, we utilised three cranes to assist the effort," he said. 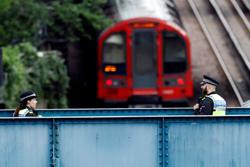