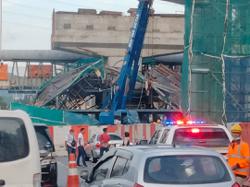 KUALA LUMPUR: An overloaded trailer was involved in the incident along the MRR2, says the Sungai Besi-Ulu Kelang Elevated Expressway (SUKE) developer.

In a statement on Wednesday (March 3), Projek Lintasan Sungai Besi-Ulu Klang Sdn. Bhd confirmed that there was an incident involving an overloaded trailer that impacted scaffolding belonging to the SUKE construction site late this afternoon

"Please be informed that the said trailer was a private vehicle and is not involved in or affiliated with the construction of the SUKE highway in any way. The accident at the MRR2 Highway near Bandar Tasik Selatan caused severe traffic congestion," it said.

It added that rescuers from the Fire and Rescue Department were on site to conduct an investigation of the incident.

"SUKE is currently extending all possible assistance and cooperation to the relevant authorities to ensure public safety. SUKE will issue a follow-up statement regarding this incident as soon as more information is available," it added.

A van with at least five people in it was trapped after a bridge under construction collapsed onto it.

The City Fire and Rescue Department in a statement said they received a distress call on the incident at around 5.58pm on Wednesday.