JOHOR BARU: About RM2bil in capital expenditure (capex) is being spent over five years starting from 2018 to improve water operations in the state, says water operator Ranhill SAJ Sdn Bhd.

Its chief executive officer Nor Ifuan Md Nor said most of the budget was for replacing old underground pipes, some of which were laid right after the country’s independence.

“Replacing the old underground pipes will help to reduce our non-revenue water (NRW)," he told reporters after handing over zakat (tithes) to four asnaf (eligible recipients) from the zakat payments this year at its headquarters here Monday (Dec 21).

The company had earlier this month contributed RM342,000 to 342 asnaf in the state where each of them had received RM1,000.

Nor Ifuan said apart from replacing the pipes, the budget would be utilised for improving the distribution system, assets replacement, and related infrastructure.

“Currently, Johor records about 26.8% NRW, and our water leakages are the lowest in the country per kilometre," he claimed.

Nor Ifuan said the on-going exercise to replace the old pipes involved replacing some 7,000km of asbestos cement pipes (ACP) that were laid more than 40 years ago.

He said that replacing the four-decades-old ACP pipes would help to improve treated water distribution in Johor, adding there were over 22,917km of water pipes of other materials which also needed to be replaced.

Nor Ifuan said water demand in Johor especially within the Iskandar Malaysia area would be on the upward trend in the coming years in tandem with industrial, property and trade activities.

It operates 44 water treatment plants with 689 reservoirs supplying water to some 3.7 million consumers in the state with 1.2 million accounts of which 1.05 million are domestic users. 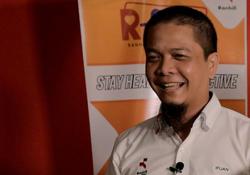