In place of IPCMC, proposed IPCC does not afford disciplinary powers

KUALA LUMPUR: The proposed Independent Police Conduct Commission (IPCC) will not have disciplinary powers when dealing with police misconduct.

This was among the major differences in the IPCC Bill which was tabled in Dewan Rakyat on Wednesday (Aug 26), ini place of the Independent Police Complaints and Misconduct Commission (IPCMC) Bill which was withdrawn by the government the same day.

Although the new Bill retains most of the former provisions in the IPCMC Bill, Section 31(3) was excluded, which would have empowered the IPCC to set up a disciplinary board to hear complains.

Also removed was Section 31(4) to allow the chief secretary to the government to set up a special disciplinary board to deal with complaints against the inspector-general of police (IGP).

And with the exclusion of the proposed Section 33(1) under the IPCMC Bill, the proposed IPCC would also not have any disciplinary powers, which is to issue warnings, fines, forfeiture of emoluments, deferments and reduction of salary movement, reduction in rank and dismissal.

Instead of a disciplinary board, Section 23 of the IPCC Bill sets up a complaints committee to investigate alleged police misconduct.

Under Section 31, the IPCC can also set up a task force to assist and conduct investigations if it is not satisfied with the findings of the complaints committee.

Following the findings and recommendations of the complaints committee, the IPCC can then only refer the case to relevant authorities for further action.

This includes referring the case to the Malaysian Anti-Corruption Commission (MACC), a police commission, head of department or the relevant authorities if a crime has been committed.

However, the IPCC Bill retains the commission's power to initiate investigations under Section 32.

The Bill also retains police responsibility under Section 26 to refer any incident which involves sexual crimes, grevious hurt or death of those under police detention or custody to the IPCC.

A new provision was included under under Section 39 of the IPCC Bill which makes it compulsory for the commission to table it an annual report in Parliament.

The Bill would also see a smaller seven-member commission instead of 10 as proposed under the IPCMC Bill.

The IPCMC was tabled for its first reading by the then Pakatan Harapan government on July 18 last year.

The then-opposition bloc, consisting of Barisan Nasional, PAS and Gabungan Parti Sarawak (GPS), indicated that they would not support the IPCMC Bill.

The IPCMC Bill was subsequently referred to Parliament's Select Committee after its second reading on Oct 7 last year to allow for improvements.

In December last year, former Law Minister Datuk Liew Vui Keong said that there would be about 36 changes to the IPCMC Bill.

Last week, Minister in the Prime Minister's Department Datuk Takiyuddin Hassan said the IPCMC Bill would be replaced with the IPCC Bill with slight changes. 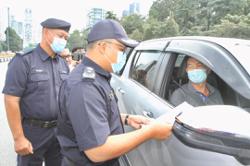