Manhunt on for suspects after car ploughs through jam-packed road

KUALA LUMPUR: Shots rang through Kampung Padang Balang as a policeman tried his best to stop a car from speeding away on a jam-packed road.

In a viral video, a traffic policeman was seen tailing a car cutting the queue on the packed dual carriageway as it desperately made its way down the road.

Confirming the incident, Kuala Lumpur Traffic Enforcement and Investigations department chief Asst Comm Zulkefly Yahya said the policeman had spotted the car earlier when he was on duty on Jalan Genting Klang on Monday (May 18) at around 4.30pm.

"There were two men in the car and they had run a red light, so the policeman chased after it on his motorcycle.

"In an attempt to lose him, the driver drove towards Jalan Gombak," he said.

The policeman did not give up pursuing the car as it entered Kampung Padang Balang's congested dual carriageway and hit a few vehicles as it tried to escape.

Slow-moving traffic allowed the policeman to chase the car on foot and he fired shots at the car's front wheel on its right side to force it to stop.

However, the driver ploughed through traffic as it headed towards the DUKE Highway, where it crashed into a road divider and was abandoned.

Police personnel then searched the car and found a packet of drugs believed to be syabu inside.

ACP Zulkefly said police are tracing the suspects, adding the car is registered to a woman in Johor and that it had not been reported stolen.

The case is being investigated for obstructing a public servant from discharging his duties under Section 186 of the Penal Code. 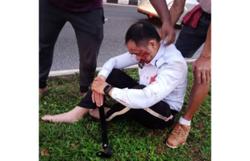