KLANG: Datuk Seri Azmin Ali says he is certain the sex video implicating him is an “inside job”.

When asked if he was convinced it was an inside job given the recent turn of events where a state PKR chief, with ties in the Philippines, had gone missing, the Economic Affairs Minister said: “I am convinced”.

Allegations are flying around that the missing PKR leader was with Haziq Abdullah Abdul Aziz, the other man in the video, who was arrested at the KL International Airport last Friday (June 14) as he was about to leave for Manila.

Speaking to reporters after attending the signing ceremony between several conglomerates pertaining to the development of affordable homes in Selangor on Tuesday (June 18), Azmin said the attack was due to his performance as a politician and Cabinet member.

“From the beginning, I was certain that this was a political agenda by certain quarters to block the progress of my performance in the government and in politics.

“And I am sure the public is aware who the culprit is in this episode,” he hinted, adding that the police should be given space to conduct their investigations.

The PKR deputy president said he had initiated several measures to clear his name including making a qazaf report that was lodged at the Federal Territory Islamic Religious Department (Jawi) citing Haziq for illicit sex and police reports.

In the past week, clips of a sex video involving two men have gone viral, followed by a confession by Haziq, who is also Santubong PKR Youth chief, that he was one of the two men in the video.

Azmin has categorically denied the allegation, saying it was made to tarnish his reputation and destroy his political career.

Haziq is being investigated under four charges, including Section 377B of the Penal Code for carnal intercourse against the order of nature and Section 292 for distributing obscene materials. 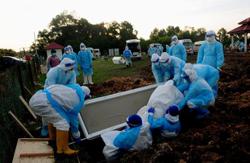