He said he (the party) did not want to make any speculation and it was up to the police to resolve the case.

"As I've said earlier, let PDRM do their job. I don't want to make any speculation but we will hear from PDRM, " he told reporters when met at the Aidilfitri open house organised by Malaysia Indian Muslim Chamber of Commerce and Industry (Mimcoin) at the Civic Hall, Petaling Jaya on Monday night.

Anwar said this in response to an Australian media news report that there was no digital alteration nor manipulation of photos in the video linked to a minister.

The report also mentioned that foreign experts analysing the video could not confirm whether the individual in the video was the minister in question.

Asked about the unity of the party over the incident as there was an alleged division in the party, Anwar insisted the party was still strong.

"The party is still united. I was in Sabah and Sarawak, all divisions attended. They came, they asked questions. Of course people are concerned on what's happening. That's the way.

"My concern is do not cast aspersions against anybody. We should rely purely on facts and clear evidence because this is not the culture that we promote and support," he said.

Earlier in his speech, Anwar hoped to work with Mimcoin in the future.

"I look forward to working with Mimcoin in the near future. This friendship or 'ukhwah' will continue and be further strengthened and enhanced," he said. - Bernama 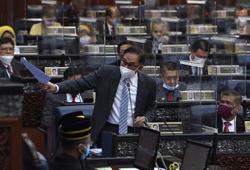