PETALING JAYA: Restrictions on mobile phone usage – even when stopped at a red light – are drilled into every Malaysian driver from driving school but in practice, many road users seem to ignore them.

A check by The Star on the Sprint Expressway found that out of 1,980 vehicles plying the road at a particular time yesterday, 42 drivers were seen talking on their phones and 83 others were either texting or reading messages.

Along Jalan Damansara, out of 2,230 vehicles that went past over the span of one hour, 51 drivers were spotted talking on their phones and 73 others seen holding them.

While some tried to be discreet, putting the phones on their laps or holding them together with the steering wheel, a majority of those spotted did not even bother to hide the fact.

In a similar check in George Town, motorists were observed fiddling with their handphones while waiting at the lights.

Some of them continued to hold their phones, and even made calls as they drove off after the light turned green.

A 30-minute check at the Jalan Magazine-Lebuh McNair traffic light junction yesterday found that from one to four drivers in the first 15 vehicles would use their phones whenever the light was red.

A total of 21 drivers of cars and lorries, as well as four motorcyclists, were seen to use their phones.

At the Jalan Ria-Jalan Magazine underpass junction, where the red light timing is longer, 20 motorists were seen using their phones over just 10 minutes.

Most of these motorists could be seen easily, except those in cars with heavily tinted windows.

On Sunday, Transport Minister Datuk Seri Liow Tiong Lai announced that there will be extra eyes on the road to monitor drivers who are glued to their smartphones.

Enforcement personnel and two types of cameras – static and mobile – would be deployed to catch errant drivers red-handed.

Drivers, however, are allowed to use navigation apps such as Waze but their phone must be mounted on a holder.

The drivers who divided their attention between the road and their phones were also seen to be a nuisance to other road users.

They would hog the road, especially the right lane, and change lanes abruptly at a fork without using their indicators.

All these had a chain effect – motorists behind them had to slam on the brakes to prevent a collision, but not everyone might respond in time.

What should have been smooth-flowing traffic became confused and momentarily congested instead.

Under Rule 17A of the Road Traffic Rules 1959, the offence of using mobile phones while driving carries a RM300 compound.

From January to October this year, the Road Transport Department (JPJ) recorded a total of 4,129 cases of motorists caught using mobile phones on the road.

In Putrajaya, Liow expressed his concern over the number of accidents caused by drivers using their phones while driving, which he said was increasing.

“We have data that shows this, and I’m concerned.

“This offence will be among the 20 others to be included in the Demerit Points System (Kejara) next year,” he said.

Currently, only two traffic offences committed by drivers will be deducted from the demerit system – speeding and beating the red light.

Next year, motorists will be penalised for other offences including driving on the emergency lane, overtaking at double lines and using the phone while driving.

Liow said the enforcement was not focused on penalties but to save lives.

Meanwhile, a check on Google Play Store showed a multitude of apps to help motorists deal with the phone while driving.

Some apps will know when the user is driving and put the phone on silent mode, disabling all notifications as well.

They will automatically respond to calls and texts to inform the caller or sender that you are driving.

However, with one app, if the same caller tries to call three times, it is treated as an emergency call and allowed through.

Other apps let users reply to messages by dictation.

Grab keeping phone use among its drivers to a minimum

Most M’sians are guilty of using their phones while driving

Keep your hands off that phone 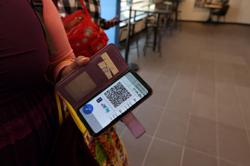