Chong: We can save time and cost by using IBS

KUCHING: The Government will be able to save time and cost by using the Industrialised Building System (IBS) to repair or upgrade schools, Deputy Education Minister Chong Sin Woon said.

He said the system, which was used in a pilot project at SJK (T) Dengkil in Selangor, had proven to be cost-efficient while construction took a shorter time to complete.

“There have been many complaints that school projects face a shortage of funds and long construction periods.

“So we always look for alternatives without compromising the quality of construction, and also speed up our service delivery,” he said after handing over grants for Chinese and mission schools in Sarawak at SJKC Chung Hua No. 3 here yesterday.

Chong was commenting on Prime Minister Datuk Seri Najib Tun Razak’s announcement that the use of IBS to upgrade schools would be extended nationwide, starting with six schools in Sarawak.

Meanwhile, the Federation of Council of Christian Mission Schools Malaysia welcomed the grants given to mission schools by the Federal Government and Education Ministry over the last few years.

Its secretary Ambrose Linang said RM80mil had been disbursed to mission schools in Sarawak from 2010 to last year. 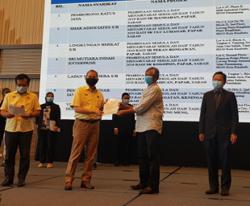