I AM a long-time resident of Section 14, Petaling Jaya and am aware of what is happening in this city, especially since the time of the proposed construction of the controversial Kinrara-Damansara Expressway (Kidex) elevated highway and its subsequent cancellation.

Recently, Selangor Mentri Besar Datuk Seri Amirudin Shari was quoted as saying that it was “unfair to equate the PJD Link to the previously scrapped Kidex.”

This is not only a shocker but also the claim in itself is totally unfair to residents of Section 14 and Petaling Jaya.

It was Selangor Economic Action Council’s decision to grant the developer permission to engage with residents that made the Section 14 Residents Action Committee swing into action.

We had requested for a meeting with Amirudin since Oct 21 last year but to date, no meeting was granted.

The residents in Section 14 had been objecting to the PJD Link elevated highway.

To date, this alignment was also not incorporated in the Petaling Jaya Local Plan.

Our checks with the Works Ministry in 2017 found that the route for PJD Link and Kidex was almost similar with minor variations.

Upon our request, the previous Petaling Jaya Selatan MP Hee Loy Sian submitted a motion in Parliament to cancel Kidex in 2017.

Hee is now a Selangor state executive councillor and Amirudin can cross-check with Hee to confirm the similarity in route for PJD Link and Kidex.

Based on the information that we have, the length of the PJD Link is 34.3km.

Briefings done by the PJD Link developer in late 2020 was without the traffic impact, social impact and environment impact assessment reports.

So whatever engagements made with the residents by the developer or some elected representatives did not comply with the standards set by the previous Selangor mentri besar Datuk Seri Azmin Ali in 2015 with regard to Kidex.

Why was the developer allowed to engage residents in the first place in the absence of these reports?

In announcing the cancellation, the former mentri besar had given his commitment that all aspects and matters connected to Kidex would be removed from the Selangor State Structural Plan 2035.

We have not seen proof that the Kidex alignment was removed from the plan.

Is the PJD Link route now borrowing the alignment of the defunct Kidex?

In the years since the cancellation of Kidex, it now appears that the builder’s interest overrides residents’ objection and is now part of the state’s development goals.

The people of Petaling Jaya had voted for a competent, accountable and transparent government in GE14.

And in the spirit of competency, accountability and transparency, it is our sincere wish for PJD Link highway to be cancelled.

We hope that the Mentri Besar will meet residents’ representatives soon to ensure fairness is accorded to all stakeholders. 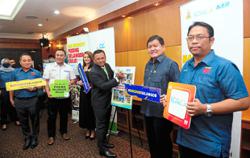 Combating infodemic in a pandemic
CNY celebrations must go on
MBPJ should give ratepayers alternative to checking and paying bills online
Low-key CNY plans in new norm
Give CNY celebrations a miss!
Contented in city of Seremban
Solidarity key to flattening curve
Hang in there, Penangites!
Businesses must meet consumer expectations
Butterflies, insects need human’s aid