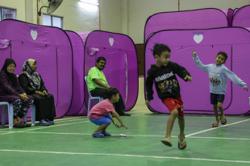 Sharifah with the boat in front of her house in Kampung Laut Batu 10, Skudai, that was used by the family during the severe floods of 2006-2007.

OCTOGENARIAN Shahadan Abdullah was in Kuala Lumpur attending his grandchild’s wedding when severe floods hit several parts of Johor in late 2006 and early 2007.

Shahadan, 85, and his 76-year-old wife Supee Tamsir left for their son’s house in Cheras on Friday, Dec 23, 2006, where the ceremony was taking place.

“It was a clear day when we left Johor Baru and we were looking forward to meeting up with our children, grandchildren and relatives,” he said when met at Kampung Laut Batu 10, Skudai in Johor Baru.

Shahadan said he received a call from one of the villagers who said the village was inundated following continuous downpour that started on Saturday.

“Initially we planned to stay at our son’s house for about a week, but the flood forced us to go back home on Monday after the ceremony was over,” he said.

The couple live in Taman Ungku Tun Aminah, and run a sundry shop in the village located about 10.9km from their house.

Prior to running the shop for the past 20 years, Shahadan worked as a battery factory machine operator for about two decades.

He recalled that when they arrived at their shop, floodwaters had already damaged all their provisions, the freezer and the refrigerator in the premises.

“I thought the water would subside by the end of December, but the floods continued until January 2007,” he said.

Shahadan estimated his losses from the flood at about RM8,000. He also took a month to clean up the premises.

He had fervently hoped that the 2006-2007 floods would not happen again, but flash floods were still common occurrence at Kampung Laut when heavy rain lasted more than an hour.

“Thank God no more major floods have hit our village, except for the occasional flash floods,” she said. Shahadan showing how high the floodwaters reached at his sundry shop in Kampung Laut Batu 10.

The floodwaters in 2006-2007 and 2010 rose to about 3m, she said, adding that after those incidents, the villagers were well prepared by keeping their valuables in higher places.

Sharifah said flash floods happened at the village due to rubbish in Sungai Skudai which was alleged to have come from Kulai and Senai.

Kampung Laut Batu 10 is located just a few metres from the river.

According to Sharifah, her family will move out when their new house in Kampung Melayu Batu is completed in the first quarter of 2023.

Iskandar Puteri mayor Datuk Haffiz Ahmad said the city council would build a third rubbish trap in Sungai Skudai as part of its efforts to clean up the river.

He disclosed that the new rubbish trap would be located near Taman Impian Emas.

The two existing traps are at Kampung Laut and Taman Sutera.

“Presently, between 30 and 40 tonnes of trapped rubbish are cleared from Sungai Skudai monthly,” said Haffiz.

He said most of the rubbish was plastic bags, polystyrene food containers, plastic bottles as well as bulk waste such as sofa and mattress.

He urged residents to stop treating rivers as an open dumping ground, because their action would pollute the water bodies.

Their irresponsible action could also lead to flash floods in Iskandar Puteri during downpours, he said.

He added that several areas in Iskandar Puteri were hit thrice by flash floods in 2021 and two times this year.

Haffiz said the city council had identified 25 temporary flood relief centres in Iskandar Puteri in the event of severe floods at the end of the year and early 2023.

Kota Tinggi was the hardest hit district in Johor in the 2006-2007 floods – the worst floods in the state in over 50 years. It forced more than 100,000 people to be evacuated to relief centres.

The entire Kota Tinggi town and nearby housing areas were submerged for nearly two weeks and they were cut off from neighbouring towns due to high floodwaters and landslides. 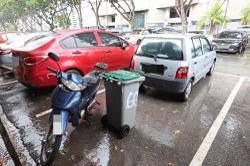