Residents in Desa Setapak, Kuala Lumpur, want the authorities to trim the overgrown trees in the area as they are safety hazards to houses and parked vehicles.

Resident S. Manoj was concerned about the electricity cables passing through the branches of untrimmed trees along Jalan 15/27b.

“If lightning were to strike, the cables might catch fire as they are so close to the trees,” he said.

Heavy rain this month had also resulted in trees and branches falling in the area, damaging vehicles and private property.

K. Kalai, who has lived in the area for 30 years, was worried that the trees are blocking the CCTV cameras.

“Fruits from fruit trees also fall onto cars parked by the road,” she said.

“DBKL engaged contractors to trim some trees a few months ago.

“However, the trees at the housing area in Desa Setapak were not properly trimmed.”

He said trees with dense foliage were covering the streetlights.

“During the Covid-19 movement control order last year, there were a few burglaries as the road was dark,” he added.

Lai also said that a resident living at the corner lot of Jalan 21/27b complained that branches of a nearby tree kept falling and damaging his roof. Kalai says trees in the neighbourhood were blocking CCTV cameras. 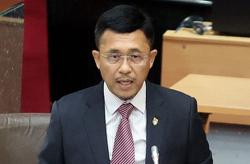