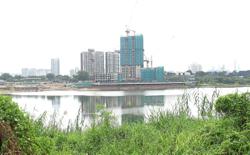 Md Noor suggests that a retention pond be built at Sluice Gate 38 to overcome flash floods in Taman Melawis.

ONE way of solving the flood problem in Taman Melawis, Klang is to build a retention pond along Sungai Klang next to Sluice Gate 38, says civil engineer Md Noor Mahmud.

The gate is located in Jalan Lembaga Bandaran, off Jalan Tepi Sungai, Klang.

“Building a retention pond outside Taman Melawis is to ensure that surface runoff within the neighbourhood is swiftly channelled out and away from the area.

“It is logical in this case to have a retention pond sited next to Sluice Gate 38, where the pump house can manage the water basin,” said Md Noor.

He said that with intense rain becoming the norm due to climate change, urban floods would become inevitable because of impervious surfaces caused by construction in low-lying areas, inadequate drainage size, bottlenecks that caused backflow and rubbish not removed from drains.

He highlighted that the earth-cut drain behind Lintang Besi must be widened and converted to a concrete drain culvert.

He also suggested that Klang Drainage and Irrigation Department (DID) build a cross drainage culvert at the end of Lorong Loyang, under a rail track across to Lorong Sembilang 8E in Jalan Tepi Sungai.

“For the Jalan Tanjung area, DID could widen the 110m stretch of monsoon drain along Jalan Bakong, where water rises to an average height of 51cm in half an hour whenever there is a downpour, due to a bottleneck,” he said.

He added that it would take six to seven months to build a retention pond that would be an effective floodwater basin.

As an immediate measure to curb the flash floods in Taman Melawis, Md Noor said MPK’s Environmental Services Department must carry out desilting in the entire stretch of the monsoon drain along the rail tracks that border Taman Melawis, drain off the excess water from Jalan Teluk Pulai and clear both monsoon drains opposite Sluice Gate 38 in Jalan Tepi Sungai. 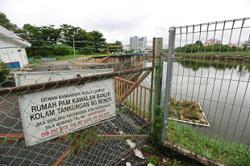 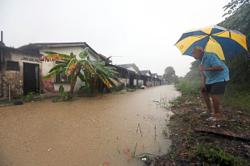