Residents had to wade through knee-deep water as many roads in the area were inaccessible to cars and motorcycles.

Part of Jalan Emas (the main road) and from the cross sections of Jalan Gangsa, Lintang Gangsa and Lorong Besi 2 up to the Jalan Emas junction with Jalan Besi were closed to vehicular traffic, while numerous side streets in the neighbourhood were also flooded.

The area has an estimated 450 residential units and 24 shoplots. A motorcyclist riding through the flash flood at Taman Melawis in Klang on Wednesday's afternoon. - IZZRAFIQ ALIAS/The Star

Pictures of senior citizens washing their living room floors blanketed in mud and scooping out the silt and murky water that had inundated homes had recently made the social media rounds.

The most recent incident on Oct 20 saw continuous rain for more than seven hours causing damage to furniture and electrical items in many houses.

As a result, residents had to spend hefty sums on house repairs and replacing the damaged items.

Businessman Mohamad Roslan Darge, 52, said the frequent floods, where water was usually up to the ankles and sometimes knee-high, were a major concern to him.

“We experienced severe floods twice this year, on Sept 9 and Oct 20. 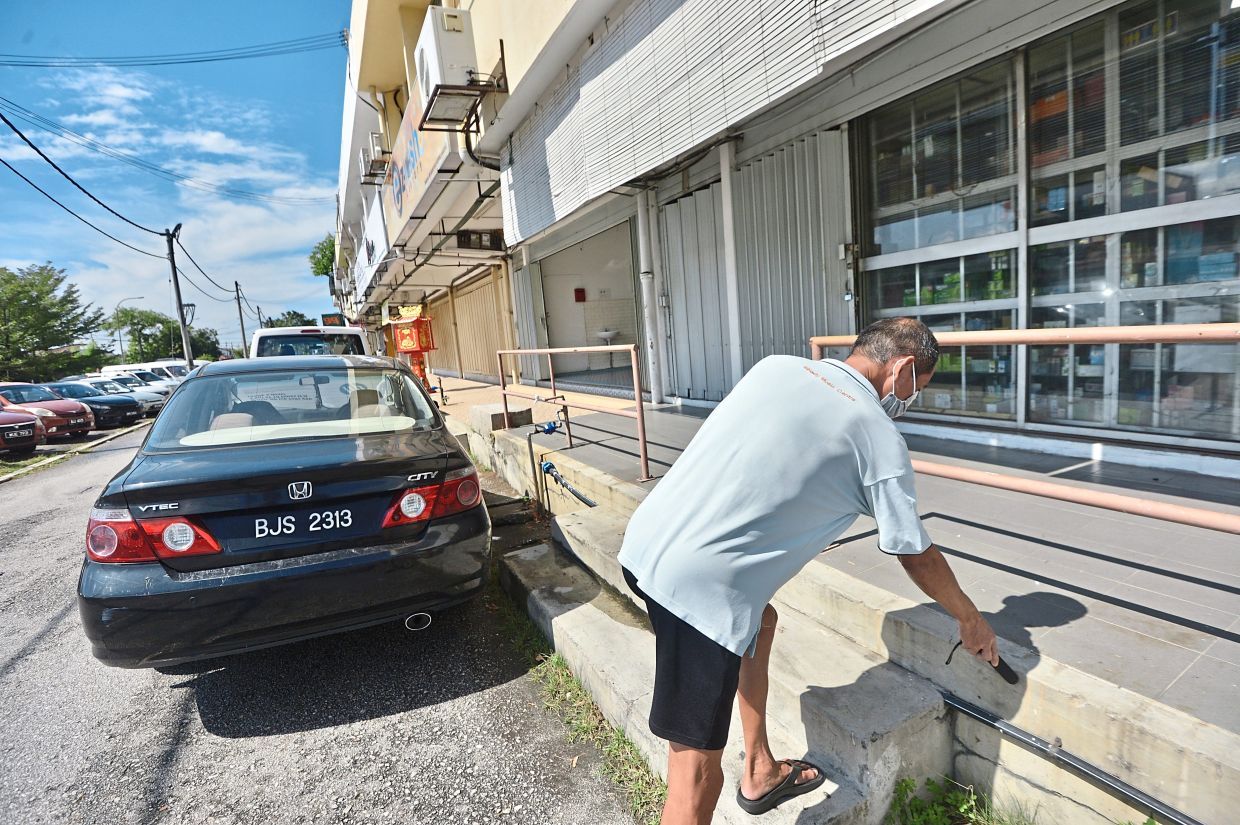 Resident E.S. Koh says water had entered the shops in Jalan Emas although they are on elevated ground.

“Flooding has become a major issue as it disrupts people’s lives, and older folk especially are at risk of injuries.

“When it floods, we incur additional expenses as there are items that will be damaged or bound to breakdown.

He added that they had not received any form of help from the authorities.

Roslan, a father of four, said, “I have lived here for over two decades and seen the main road looking like a river.

“There would be stalled vehicles on the road because some motorists attempted to drive through the waters and failed.”

Abdul Rahiman Kallattyil, 70, who lives in Jalan Gangsa, said floodwaters even breached the raised portion of a house and flowed into the hall and kitchen in a recent incident. Sengani throwing out a bookshelf after it was damaged in the Oct 20 flash floods.

“It took about two hours for the water to recede — about 10pm.

“Our electrical items had to be repaired, including the refrigerator which we could not use for three days.

“Cleaning up the house was an arduous task as there was thick mud.

“Our wooden furniture was badly damaged,” he added.

Another frustrated resident, Sharifah Ismail, 50, said the authorities must implement mitigation works to resolve the flash flood problem that had plagued Taman Melawis for too long.

“It is getting worse as floodwaters have risen up to the level of the raised shoplots along Jalan Emas,” she said.

Harnaik Singh, 56, who has been living at Lintang Besi for about 14 years, said the rains were getting more intense compared to a decade ago, a result of climate change. Abdul Rahiman shows how waters breached the raised skirting at the entrance and flooded his house in Lorong Gangsa.

“The people are the victims due to the failure of authorities and policymakers in improving the drainage system.

“We need a determined effort from Klang Municipal Council (MPK) and the Klang Drainage and Irrigation Department to widen the drains,” he said.

Harnaik suggested that a retention pond be built next to Sluice Gate 38 in Jalan Lembaga Bandaran.

Businesswoman Lim Soh Lan, 74, said the drain behind Lintang Besi was inadequate to channel away the deluge of rainwater.

Sengani Mookan, 66, who lives at Jalan Emas, said his house was flooded despite having raised the front and back entrances.

Restaurant operator Foong Wing Leong, 52, said most of the shops along Lintang Gangsa were not spared either, as the water level for the last flood rose up to the ankle.

He said that based on land elevation reports, Taman Melawis’ lowest point was 1.83m above sea level while the highest point was 2.02m and the neighbourhood was among the flattest areas in Klang.

Known as Kampung Attap in the 1940s, the British government zoned Taman Melawis for agricultural use to allow it to remain as a flood plain.

“It was only after 1965 that the owners of two parcels of land in the area started building brick houses.

“One housing estate was named Heng Luing Garden and the other called Swee See Garden.

“The developers faced challenges in building drains as the area was an impounding lake,” said Serjeet.

He is a former Water Works Department technical officer who used to supervise the laying of water pipes in the area.

“Both neighbourhoods had an official name change in the 1970s, after which they were collectively called Taman Melawis.

“Consequently, roads are waterlogged and the water flows into houses,” he said.

He added that some parts of the monsoon drain from Kampung Martin, off Jalan Teluk Pulai, and the back of Lintang Besi was in need of upgrading as it was still an earth-cut drain.

“Old drains built in the 1960s do not have the width and they are now more like scupper drains,” Serjeet pointed out. 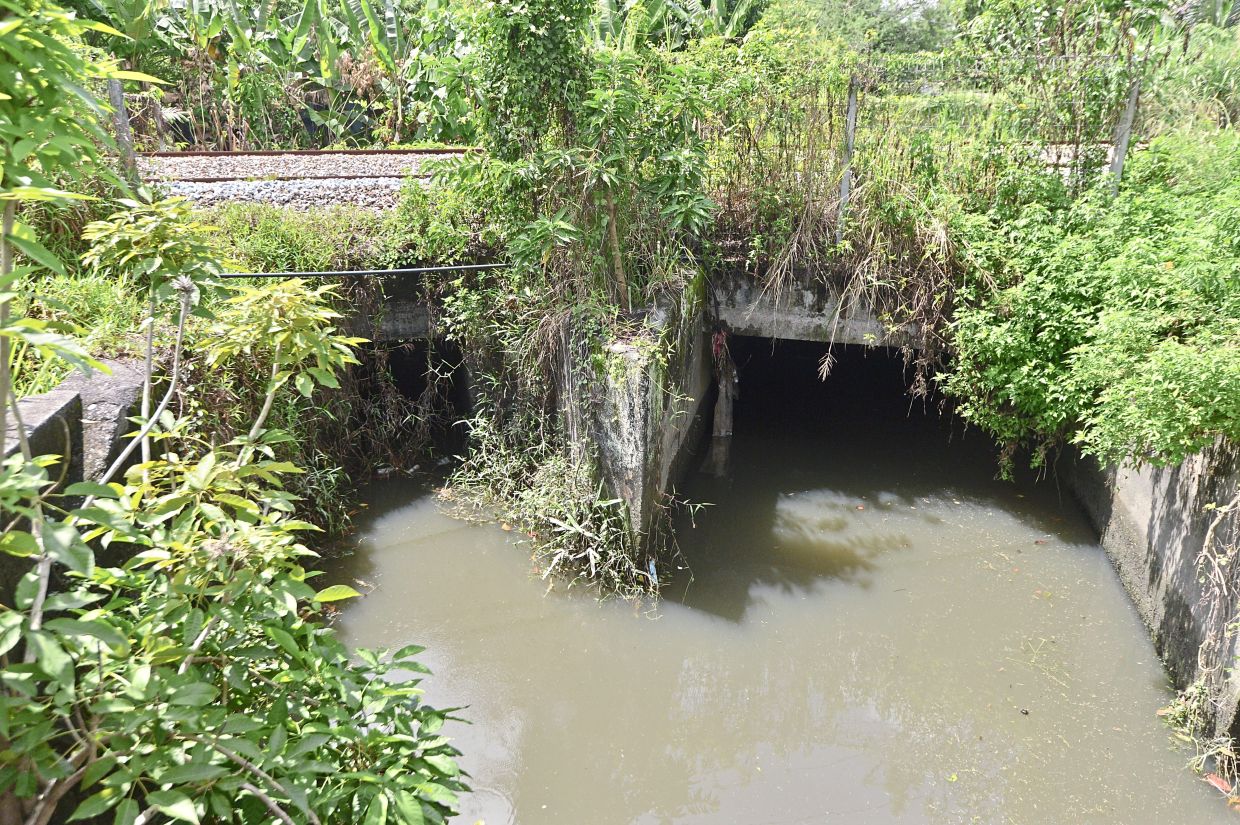 Harnaik: The council and DID must widen the drains in the neighbourhood.

Foong: Floodwaters had risen to about 15cm at my restaurant.

Roslan is frustrated that his furniture and electrical items are damaged every time it floods.

Immediate measures through desilting and removal of dirt from monsoon drains can help curb flash floods in the area.

Sharifah: The authorities must carry out flood mitigation works in the area.

Foong (right) says flood waters had risen by about 15cm and flowed into the restaurant premises. - RAJA FAISAL HISHAN/The Star

Lim says it took a long time to wash off the mud and silt from her house. - RAJA FAISAL HISHAN/The Star