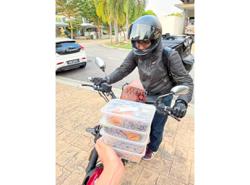 Adibi gets direct feedback from customers when delivering his seaweed products.

He is in fact a bona fide seaweed scientist.

Endearingly, his social media page is called “Drcweed” which he started in July this year as a forum for educating people about seaweed.

A marine biologist and aquaculturalist by training, Adibi developed a love for seaweed when he was a researcher at Universiti Sains Malaysia in 2002.

He started in July to specifically cultivate the Gracilaria species at the farm and create awareness of this type of seaweed and how it could be consumed.

“Realising that I needed to do something, I engaged with the local community on the seaweed aquaculture initiative,” said Adibi, who had also worked in Sabah.

The farm owner, Jalaludin Kassim, had sought advice from Adibi about algae found at the farm, which turned out to be red seaweed that could be cultivated and commercialised.

Under their collaboration, they managed to produce over a tonne of seaweed in two months.

Not only that, Adibi is also infusing the seaweed --- known as “sare” in his home state of Kelantan --- with flavours from the east coast with the help of his sister-in-law.

In addition, Adibi has collaborated with his wife, Julita Zam, on seaweed marketing.

As a result, they have come up with their own seaweed brand – sarÃ¡y.

Using seaweed, budu – a fermented anchovy sauce – dry-fried grated coconut, deboned fish, sambal and lime, Adibi has started selling his kerabu and delivering it himself in the Klang Valley.

He views it as a pilot project as he not only delivers the product but also gets feedback from customers.

“Although seaweed has numerous applications in everyday life, many are not aware of this.

“By educating people, they will understand its true value.

“Furthermore, since the sare seaweed is homegrown, it is more accessible and affordable.

“The goal of the study is to ex- pand on the value of the Gracilaria seaweed,” he told StarMetro.

Considered a superfood, it is used in traditional dishes in Kelantan served with beverages and sweets during Ramadan, he said.

“The supply for the Kelantan market was from Thailand and with its high content of iodine and nutritional composition, health authorities had encouraged pregnant women to consume sare.

“However, in 1996, Health Ministry prohibited the import of sare from Thailand after it was found to be contaminated with heavy metals.

“So my intention now is to produce safe seaweed and influence policymakers to regulate and legalise the Gracilaria seaweed farming industry,” he added.

Adibi decided to continue his work by pursuing a PhD in the United Kingdom.

The title of his thesis is “The Effect of Seaweed Aquaculture Cooperatives on Sustainable Livelihoods in Malaysia.”

He said the Malaysian seaweed industry depended on seaweed from Semporna, Sabah, which used a conventional method of cultivation.

“Its production has been inadequate, and the production of dried seaweed has shown a declining trend since 2012, although some have increased.

“Realising that the current cultivation system is not economical or friendly to farmers, Gracilaria has been identified as more economical.

“So, it is high time we introduce, develop and farm this species along our coastal areas,” he said.

Over the last few months, people who consumed sare have shared their recipes on Adibi’s social media page.

“From here, we can study the acceptance of homegrown seaweed and educate people on how to consume seaweed.

“I would like to be an enabler to the seaweed community so that we can build a circular economy for the farmers that I have been so privileged to have worked with,” he said. 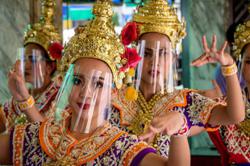