A FEW years ago, local businessman Jalaludin Kassim invested in a 10ha land along the coast of Muar in Johor, hoping to set up an aquaculture farm breeding cockles and oysters.

The company, Laman Alam Jaya Sdn Bhd, even received technical assistance and a small grant from Agriculture and Agro-based Industry Ministry in 2018 since it was regarded as a pioneer in this type of farming.

However, just as the 62-year-old was about to harvest his cockles and oysters, the government imposed the movement control order as a result of the Covid-19 pandemic in March 2020.

Unable to travel from Kuala Lumpur to check on his farm, Jalaludin was forced to put everything on hold for a year.

He finally made the trip to Muar in May.

Almost all his 60,000 oysters and 1.2tonnes of cockles were either dead or had disappeared, but to his surprise, he found that a new type of species was thriving in the eight ponds. 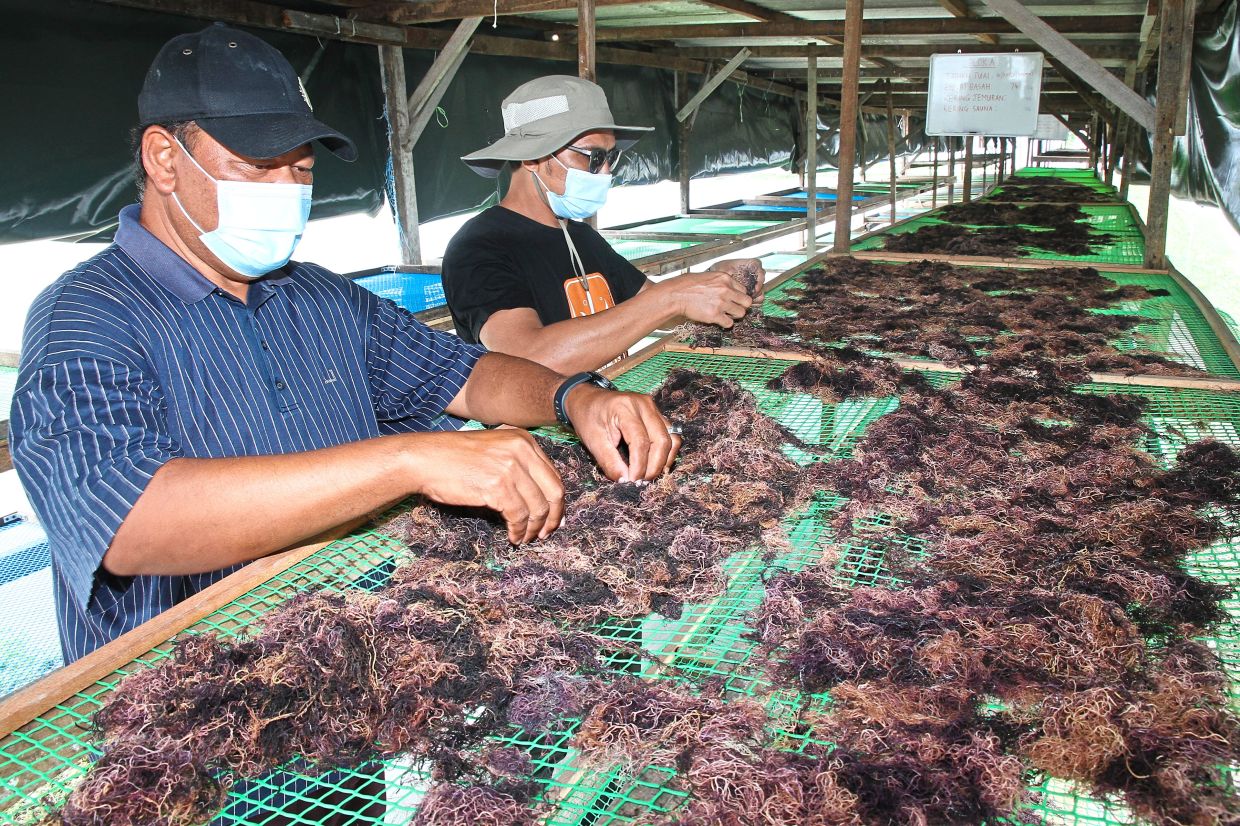 Jalaludin (left) and Adibi sorting through the dried red seaweed.

It turned out to be red algae, a type of seaweed known as Gracilaria.

“It is not just food but also useful to the pharmaceutical, cosmetics and animal feed industries, as well as used in production of bio-plastics, food stabiliser and even as bio-fertiliser,” said Jalaludin.

He has since teamed up with Universiti Malaya’s senior lecturer Dr Adibi Rahiman Md Nor, also a marine biologist and aquaculturist, to continue research on the benefits of this red seaweed so that it can be marketed commercially.

“When we wanted to harvest the remaining cockles in the ponds, we had to deal with the algae that had formed a red layer on top.

“Nobody in the area had ever seen this kind of algae,” said the businessman, who lamented that thieves had ransacked the living quarters at the farm and carted away equipment and electrical items worth thousands of ringgit.

Looking to solve the algae problem, Jalaludin contacted the Fisheries Department to find out how to get rid of it.

The department suggested that he contact Adibi, who asked him to show samples and photographs of the red layer in the pond.

“Adibi explained about the seaweed and its potential and told me that he had been studying the species for about 10 years in Sabah.” The harvested seaweed is placed in a makeshift net, after which it is taken out to be weighed, dried and cleaned. — Photos: THOMAS YONG/The Star

However, the businessman had by then thrown away several tonnes of the algae.

Adibi finally managed to see for himself the red coating on the ponds last month.

Jalaludin said he was now following Adibi’s advice and had built sheds to dry the algae, remove the impurities and pack it into 10kg bags.

“We catalogue and weigh each batch that we harvest, dry it for two days before removing the impurities and cleaning it,” he elaborated.

He said the current price of 1kg of dried seaweed was about RM30.

“Once it is soaked in water, it can expand and weigh four times its original weight.

“As long as we have favourable water conditions with the right temperature, we should be able to harvest the red seaweed every 45 days,” he said, adding that it required low maintenance.

Jalaludin said the Muar district officer had visited the farm recently and was impressed by what had been achieved so far.

“I hope the government will also support us, especially in infrastructure development, as there has been coastal erosion next to my farm,” he said, noting that there should be further research too on the algae.

He added that the farm provided many jobs to the locals, especially women in the community who would tend to the ponds and help clean the seaweed.

Jalaludin is confident that with Adibi’s help, especially in putting together the research data, they will be able to produce at least 20 tonnes of seaweed from each pond.

“I see a lot of potential in red seaweed.

“We are learning a lot as we go along and helping to establish best practices for this industry,” he said, adding that Indonesia was presently the top producer of seaweed in the region while China processed it into various products, one of which was jelly.

With the aim of expanding the business further, the Kuala-Lumpur based Jalaludin and his wife have been spending more time in Muar.

“We have been harvesting seaweed from only one pond while the rest have yet to be harvested.

“I am excited about the possibilities, not just for the money it will bring, but in creating more jobs for the community,” he said.