AMID the Covid-19 pandemic, members of a local community group continue to keep an eye on several main rivers in Ipoh, Perak, with one main objective — to check pollution.

The River and Smart Rangers, comprising eight youths, have made it their primary aim to stop pollution and improve the condition of rivers, mainly Sungai Kinta, Sungai Pari and Sungai Buntong.

Group coordinator S. Jayagopi said they were making it a point to carry out their own river clean-ups by collecting rubbish, mainly plastic and other discarded household items.

If they spotted individuals dumping rubbish into the rivers or by the riverbanks, the group’s members would advise them not to do so, he added.

“When we explain to them that the water we consume or use comes from the rivers, some of them understand and promise not to repeat their actions.

“However, there are still some who think that our rivers and waterways are dumpsites,” said Jayagopi during an interview at the River Care Education Centre located at the Buntong 3 and 4 Rukun Tetangga (RT) base in Ipoh.

Set up in 2012, it is an initiative by Malaysian non-governmental organisation Global Environment Centre (GEC).

Jayagopi, who is also an Ipoh City councillor, said generally 97% of water consumed came from rivers, and thus it was the rangers’ mission and duty to educate the public to stop polluting rivers.

He said people must realise the importance of keeping rivers clean and it should shock them to see water sources that are the colour of “teh tarik”.

“Fish and other river creatures also might get caught or choke on plastic materials that could spell death for them.

“Before the pandemic, major river clean-ups were carried out at least twice a year – in March during World Water Day and in September during World River Day.

“But since there are restrictions against gatherings now because of Covid-19, we are unable to do such clean-ups.

“Nevertheless, we still take every opportunity to remind the public not to throw unwanted items into rivers,” he added.

Jayagopi, who is also Buntong 3 and 4 RT chairman, said he had been educating the public on the proper way to dispose of their household waste by tying up the bags of rubbish and putting the bin out only when garbage collectors were scheduled to do their rounds.

He noted that many people resorted to dumping bulky household items like sofas and other old furniture into rivers or on riverbanks as a quick and easy way.

“Before the pandemic, we organised visits to the rivers for non-governmental organisations and schoolchildren.

“The idea is to teach them how to identify rivers that are ‘alive’ or ‘’dead’, how oxygen is created and ways to test the water quality.

“Our river rangers are all hands-on in matters related to rivers.

“In 2019, they were declared the national champions in a competition held in conjunction with World Water Day,” he added.

Jayagopi said he made it a point to observe the rivers in the area each day and would notify the Drainage and Irrigation Depart-ment if he sighted a problem.

He encouraged more youths to join the group, saying that apart from gaining knowledge, their participation would give them extra co-curricular points when gaining entry into universities and other higher learning institutions.

“We are also trying to organise activities involving younger schoolchildren, including preschoolers, as it is important to shape their mindset from young,” he stressed.

Jayagopi said besides river-related activities, the rangers were also taught to recycle products.

They have started making candles and soap out of used cooking oil, which otherwise may clog up drains if not properly discarded.

He said the upcycled items were usually given away as door gifts whenever activities and programmes were held at the River Care Education Centre.

Youth ranger leader S. Pravin, 21, said he previously had little knowledge of pollution and the damage it could cause, but joining the group had made him more aware and conscious of the environment.

The importance of keeping our rivers clean is in the hands of the people and I often share my knowledge with family, friends and even strangers.

“I just want to see a cleaner environment, so whenever I see rubbish anywhere, I will pick it up and put it into a rubbish bin.

“Besides that, we also focus on rainwater harvesting, where rainwater collected is used to water the vegetables and fruits grown at the RT compound.

“I am so glad that at the centre, I have also learned about composting, where grass and fallen tree branches are put into a huge container and later used as fertiliser,” he added.

Another ranger, K. Tamiylalagi, 20, said she was glad to learn the art of making soap and candles from used cooking oil.

“Whatever knowledge gained, I have passed on to others as well, and it really feels good to know that I have done my part in conserving the environment.

“I joined as a ranger nine years ago and I now know how to check the water pH level.

“After telling my neighbours about how used cooking oil can be recycled, less of it is being thrown out.

“Since then, the drains in my housing area are much cleaner.

“How healthy and well we live also depends on what goes into our drains and rivers.

“Continuing to use drains and rivers to dump rubbish is to continue endangering our own health and environment,” Tamiylalagi added.

For 18-year-old S. Santhia, joining the ranger programme was her way of doing her bit to save the environment.

“I have no regrets becoming a ranger because the knowledge I have gained here is simply amazing and useful,” she said. 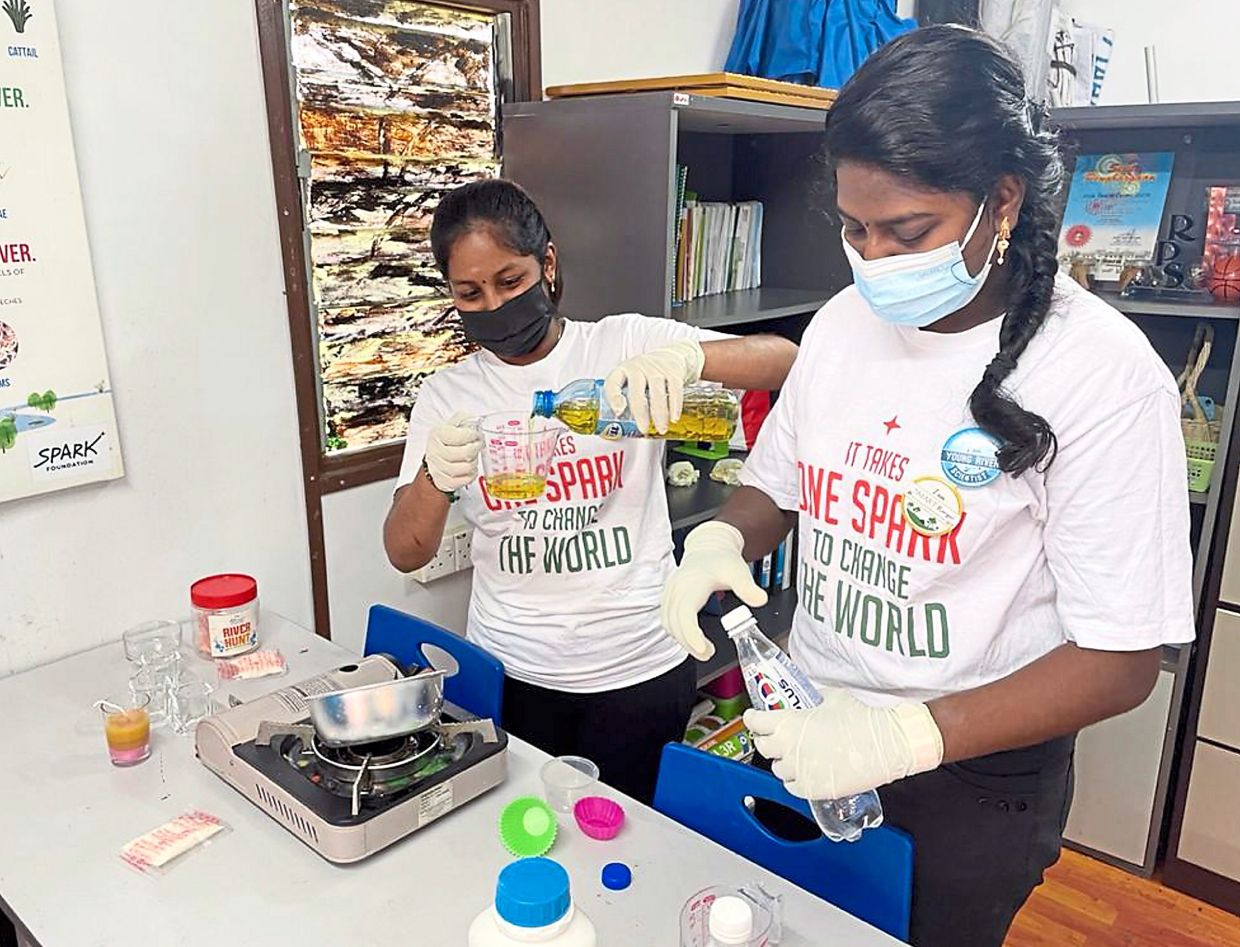 Some of the colourful candles and soaps that the rangers made from used cooking oil.

Tamiylalagi (left) and Santhia measuring the bottles of used cooking oil that goes into the making of the candles and soap.

Plastic items, discarded food and broken ceramic flower pots are among items river rangers picked up during a clean-up exercise before the Covid-19 pandemic. — Filepic

Rainwater harvested in this tank is used to water the vegetables and fruits grown at the premises.