He said the PPV at Vangohh Eminent Hotel was expected to start operations on Monday, Aug 9, with a daily injection rate of 2,000 doses, following the approval of the state’s application by the Covid-19 Immunisation Task Force (CITF).

“With four PPV in full operation, we can dispense 4,800 doses daily in this district,” Chow said.

The other PPV are at SP Arena, Seberang Jaya expo site and One Hope Charity PPV in Juru.

Chow said there were three elements that should be analysed based on the data shared by the Special Committee On Covid-19 Vaccine Supply (JKJAV) up until Aug 2.

He said Penang was among the top six states in vaccination rates, having administered vaccines to a total of 1,100,073 people so far.

“For the total population, Penang is also in the top six, with 44.4% of its people receiving their first dose.

“This is above the national percentage of 44.3%. The percentage for the population in completing two doses of vaccine is 17.7%.

“As for the state’s adult population, we are ranked among the top six states, having achieved 57.6% and 22.6% for first-dose and fully-vaccinated recipients respectively,” he said in a statement on Tuesday.

Chow hoped the supply of vaccines would not be reduced this month, adding that the supply stock for the state only started to increase last month.

“Currently, the state government and the state Health Department have not been informed about the total supply of vaccines that will arrive in the second week of August and beyond.

“We hope that the Science, Technology and Innovation Ministry can provide immediate feedback on this matter,” he said.

Chow also said the state was inching towards Phase Three of the National Recovery Plan (NRP), as more people were expected to receive their second dose next week.

Those who received AstraZeneca (AZ) vaccines would start getting their second jabs next week.

“This will enable us to achieve the vaccination rate of 40% so that we can enter Phase Three of the NRP.

“The state government is confident and committed that we will achieve 100% of the adult population in receiving the first dose by early next month,” he said. 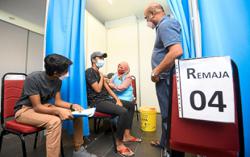