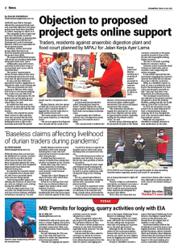 THERE is a great need to preserve and protect the cave monastery at Gunung Kanthan in Perak for its heritage value, said Badan Warisan Malaysia (BWM).

BWM general manager Vanessa Loong said the Dhamma Sakyamuni Caves Monastery and a temple on the same premises near Chemor should be kept intact and safe for human habitation so that they could be appreciated by future generations.

“They are of national significance.

“We are deeply concerned and appeal to the relevant authorities, especially the Land and Mines Department, to intervene and protect the monastery and temple.”

She said the non-governmental organisation was advocating to preserve the cultural, natural and architectural heritage from being lost forever.

She added that Gunung Kanthan was known for its unique flora and fauna that should be protected too.

“This issue is one of national significance as the heritage value and interest go far beyond the state of Perak; the temples, caves and limestone hills belong to all Malaysians.

“They must be saved and protected as a whole, for posterity, ” Loong added.

It was reported that the century-old Buddhist temple and monastery, located on a 2.02ha piece of land, is facing the possibility of eviction because of quarrying activities.

Monastery abbot Chiong Sai Tin had hoped the state would gazette the hill and monastery as heritage and religious sites.

She said the limestone outcrop could be on the verge of irreversibly losing its priceless geological, biological, cultural, tourism and recreational value.

“Together with other limestone outcrops, it forms the distinctive karst landscape surrounding Ipoh, ” she highlighted.

She noted that cave dwellings were natural spaces where humans had lived in since time immemorial.

“In the case of Perak, human inhabitants have lived in the caves of its ancient limestone hills as evidenced by the discovery of the intact skeletal remains of the Perak Man in 1990, found amidst burial artefacts which date back to about 11, 000 years ago in the Lenggong Valley.

“The present Buddhist and Hindu temples as well as monasteries constructed within the nearby Gunung Kanthan echo those ancient ones found in India and China, and these buildings are attached to the natural caverns in the limestone hills and outcrops of Perak, ” said Loong.

“The natural beauty of these karst formations has led to favourable comparisons to the famous karst landscape of the hills in Guilin, China, with their unique rounded silhouettes in the natural landscape.

“The Buddhist and Hindu cave temples in Ipoh together with the dramatic karst landscape are famous tourist attractions for local and international visitors.

“They are priceless heritage worthy of preservation, ” she reiterated. 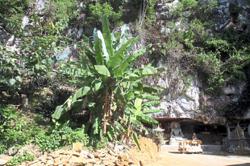 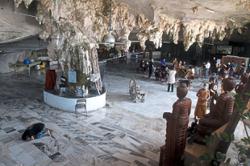