Exciting online programmes for GTF from July 10 to 18

Penang tourism and creative economy committee chairman Yeoh Soon Hin said GTF would go on with its slew of online programmes from July 10 to 18 while putting a temporary halt to physical events due to the nation’s alarming situation of the pandemic and restriction measures. 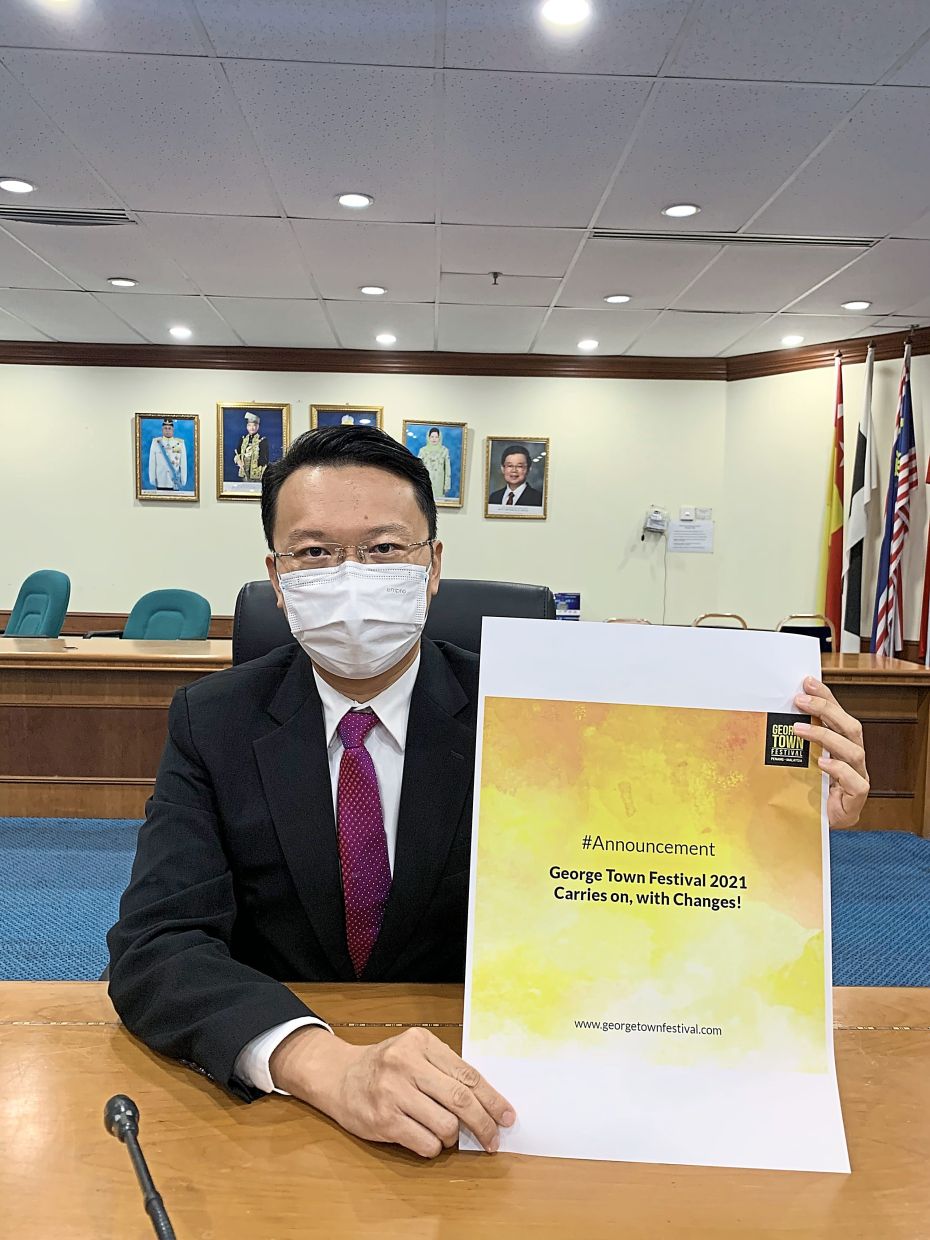 Yeoh says George Town Festival this year will be carried out fully online.

He said the postponement of the physical events was necessary to support the nation’s efforts in curbing the spread of Covid-19 and to protect the health and well-being of the artists, participants, staff and audiences.

“Despite postponing the physical events until the situation permits, festival-goers can still look forward to exciting online programmes that will carry on as scheduled.

“Although the global upheaval has disrupted our lifestyle and conventional festival management since last year, Penang has maintained

its commitment in catapulting the state’s creative ecosystem by recalibrating GTF to an online-friendly version to better embrace the new normal.

“Shifting GTF’s programmes online enables Penang to reach new international markets and accelerate the usage of digital elements in art, supporting the Penang2030 vision,” he said in a recent statement.

Event public relations executive Ng Kim Theng said despite the pandemic, GTF with the theme ‘A Festival for Everyone’, continues its commitment to make art accessible to everyone – from the festival-goers to the art communities, the general public and the underprivileged, regardless of age, ethnicity or background.

“Festival-goers can expect to uncover impressive performances and activities revolving around various themes in unlikeliest settings, from indoor performing spaces to hidden spots and unique venues as well as on virtual platforms.

“The public can experience the state’s diverse arts and culture scene in a brand new way through the integration of traditional forms of on-site entertainment with modern virtual elements,” she said.

Ng highlighted some of the online programmes which the public can look forward to during the week-long festival.

The public can join G-Short, which is a short film festival held as part of the GTF 2021 to celebrate the endless imagination and possibilities through a 90-second short film.

Themed ‘Reimagine: A New Way of Seeing’, G-Short was conceived to encourage the local and international film communities to create short-form and original films, unleashing their creativity and innovation to tell stories in new ways.

There will be two sharing sessions on July 17 at 2pm and 4pm via Zoom, together with the public screenings which feature the works of 30 finalists selected from 697

submissions from July 14 to 16 at 8pm through CloudTheatre.

The winners will be announced on July 18 at 8pm.

“’Lights On’ is a virtual projection mapping installation programme which showcases George Town’s diverse cultural and historical landscapes through pulsating lights and swimming patterns projected onto a small mock-up of the heritage city.

“The event is accompanied by two main components, which is a one-month-long virtual residency programme and a virtual exhibition.

“The virtual residency programme aims at selecting seven residency artists to create their micro projection mapping designs under the guidance of professional advisors and curators.

“The virtual exhibition will showcase the residency artists’ designs that will be projected onto a micro mock-up of the heritage city of George Town,” she said.

Ng added that the public could look forward to ‘Perspectives’, which is a disability-led film directed by Peggy Ferroa and Michael Chua, on July 11 at 3pm through CloudTheatre.

“The docu-drama features soundscapes by the Harmony Community Choir, a choir that primarily consists of young adult choral singers with autism and other learning disabilities.

“The screening will be followed by a discussion featuring the performers and Ferroa.

“Besides, there will be a digital theatre entitled ‘Body X The Culprit’ from July 10 to 18 at 8pm. The

theatre will be in Mandarin with English and Chinese subtitles with tickets priced at RM90 and RM288 respectively.

“Through the production, participants will get involved in the solving of a murder-mystery and experience it as if they are living in the physical space! It will be the first interactive-immersive digital theatre ever presented on Zoom.

“There’s also an audio-immersive theatre entitled ‘Imaginarium’ that acknowledges the limitations lockdowns have imposed on the theatre industry and people’s lives.