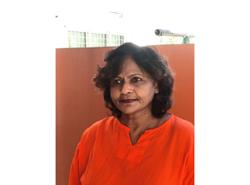 THE association managing a Hindu cemetery in Ampang that complained about a proposed anaerobic digestion (AD) plant project next to it, has claimed that the local council did not discuss matters with it.

Hindu Cemetery Crematorium Ampang Association said Ampang Jaya Municipal Council (MPAJ) did not inform the relevant parties about the plans to build the plant and a food court in Jalan Kerja Ayer Lama.

The AD’s location is in front of the 60-year-old Ampang/Ulu Kelang Hindu Cemetery in Kuala Lumpur.

The site is currently the parking facility for cemetery visitors.

The food court is set to be located less than 50m away from the AD plant.

Association secretary Saradha K. Suppiah (pic) said MPAJ did not inform the association about the plans nor called the committee for a meeting as claimed.“MPAJ had only addressed a letter to a worker at the cemetery instead of sending an official notice to the committee about a meeting last year to discuss this proposal.

“How can this be when we have had many correspondences with MPAJ over cemetery matters since 2012? We are the rightful party that should have been notified.

“How are we supposed to voice our concerns or objections when we have not even been informed in the first place?” she questioned.

Saradha said the cemetery was established by her late father, K. Suppiah and it was gazetted in 1962.

Saradha said they were not aware of the AD project until the hoardings were installed at the site and construction started at the end of May.

“We have sent an official letter to MPAJ requesting a meeting on this matter.

“Until then, MPAJ must put a hold on the project,” she said, adding that the burial ground would be temporarily closed for upgrading and maintenance works.

MPAJ had said the AD was one way to tackle excessive food waste by processing it into compost for fertiliser and the biogas produced would generate electricity.

A StarMetro report on June 14 quoted MPAJ press relations officer Norhayati Ahmad saying that a coordination meeting for the development of the food court and AD plant was held on July 7 last year, and was attended by the affected parties.

She had said that no one objected to the project and all agreed to share the parking facilities, adding that the AD would take up 22% of the 0.15ha land.

Norhayati said the RM4.56mil project was currently in the initial stages of construction by MPAJ, in collaboration with the Housing and Local Government Ministry.

Meanwhile, former Cabinet minister Tan Sri Dr Rais Yatim, who has been an Ampang Jaya resident since 1975, called on MPAJ to provide information on the project to residents in all neighbourhoods in the area.“It is not just the immediate community who are affected. It is only right that all residents are consulted,” said Rais who is Dewan Negara president.

He said MPAJ should address everyone’s concerns about the project, especially over any potential dangers of the AD plant.

MPAJ councillor R. Moganraj has planned to arrange a meeting among all concerned parties after the lockdown is lifted.

Ampang MP Datuk Zuraida Kamaruddin, who is also Housing and Local Government Minister, was reported earlier as saying that the project was expected to be completed by January next year.

The new food court will have 17 stalls and two kiosks, toilet, nursing room, surau and carpark. 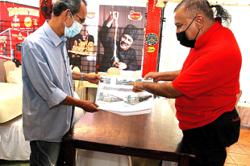