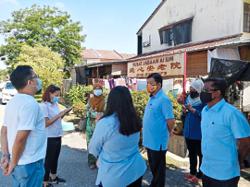 Vijaya drying out her carpets after her home was inundated by mud water. – Photos: SHAARI CHEMAT/The Star

AN unusually heavy rainfall was the cause of severe flooding in parts of Kajang, Selangor on Wednesday evening, say authorities.

Some areas recorded 125mm of rainfall, which was twice the normal amount for the area, causing Sungai Langat to overflow its banks.

Kajang assemblyman Hee Loy Sian said floodwaters receded within an hour and there were no casualties.

He said cleaning and remedial works were being carried out by Kajang Municipal Council (MPKj) and other relevant authorities.

“Immediate plans are to rebuild the monsoon drain in Taman Impian Setia, which is expected to cost RM200,000, as well as an additional RM40,000 to desilt Sungai Jernih.

“This neighbourhood has experienced periodic flooding for the past 22 years and it is time something is done. Rainwater surged into this monsoon drain in Taman Impian Setia, Kajang, causing its walls to collapse and water to overflow.

“The collapsed wall will be rebuilt with concrete and work is expected to be completed in two months, ” he said, adding that cost would be channelled from MPKj’s emergency fund.

Hee also said a drainage upgrading project would be carried out in Taman Sri Langat by Selangor’s Drainage and Irrigation Department to address flood problems there.

“It will cost about RM470,000 to desilt and build drain bunds to contain the water overflow.

“Work is expected to start in June, ” he added.

The Sungai Langat Phase 2 Flood Mitigation Plan includes deepening and strengthening the banks of the river and its tributaries, as well as building four retention ponds.

“This needs to be done to improve water flow capacity.

“We have requested funds from the Federal Government under the 12th Malaysia Plan, ” said Hee.

Meanwhile, Taman Impian Setia resident Vijaya Raman, 45, and her family spent the morning cleaning up their home after Wednesday’s flood.

“We were lucky the water only reached several inches in the hall, so only our carpets and some furniture were damaged.

“But we still had to spend several hours cleaning up as mud water gushed in when the monsoon drain broke, ” she said, adding that the water receded in 30 minutes. 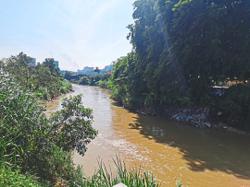