TRAFFIC leading to Zoo Negara was almost at a standstill at 9.30am one Saturday recently. 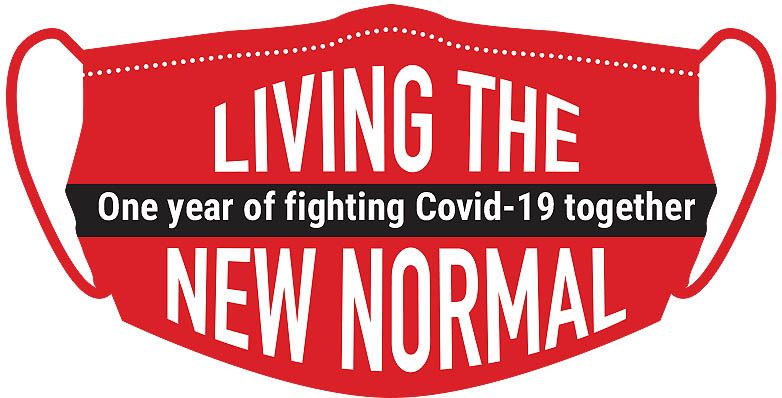 After weeks of closure during the movement control order which saw its earnings nosedive, this 44ha national landmark in Hulu Kelang, Selangor, was again brimming with visitors.

Over at the Kuala Lumpur Bird Park in the city centre, a similar situation was taking place, as more and more vehicles were parked in the area, with some occupying roadsides.

As interstate travel ban remains in place, local attractions have been seeing a spike in foot traffic in recent weeks as stir-crazy folk come out in droves to spend time outside their home.

Unable to cross the state border for balik kampung trips and vacation, they are exploring local attractions and venues to satisfy their travel itch.

Mohd Fauzan Jamil, 29, and wife Arfalina Arrifin, 29, whom StarMetro spoke to at the zoo, said they were celebrating their one-year-old daughter’s birthday.

“She was born on March 18 last year which coincidentally was also the first day of the MCO, ” said Mohd Fauzan.

The couple from Sentul, Kuala Lumpur, said they wanted to enjoy some quality time outdoors as a family after having spent so much time within the four walls of their house due to the MCO.

Some city folk have chosen to visit the iconic Central Market for sightseeing. — Filepic

A week before that, they went to Aquaria KLCC and the KL Tower Mini Zoo in Bukit Nanas for sightseeing.

“We love animals, which is why we chose to visit these places.

“It is also a way to help these venues get some revenue again after a period of no business during the MCO, ” said Mohd Fauzan.

Father-of-two Muhammad Zaedi Mohd Asri, 31, said he and his wife Norain Mohamed Ayeim, 30, brought their boys aged six and two to the zoo for some fresh air.

“We feel bad for them because they have been cooped up at home for a long time.

“I chose an outdoor venue so they could explore and learn more things, as opposed to going to a shopping centre, ” said the landscape architect from Shah Alam, Selangor. 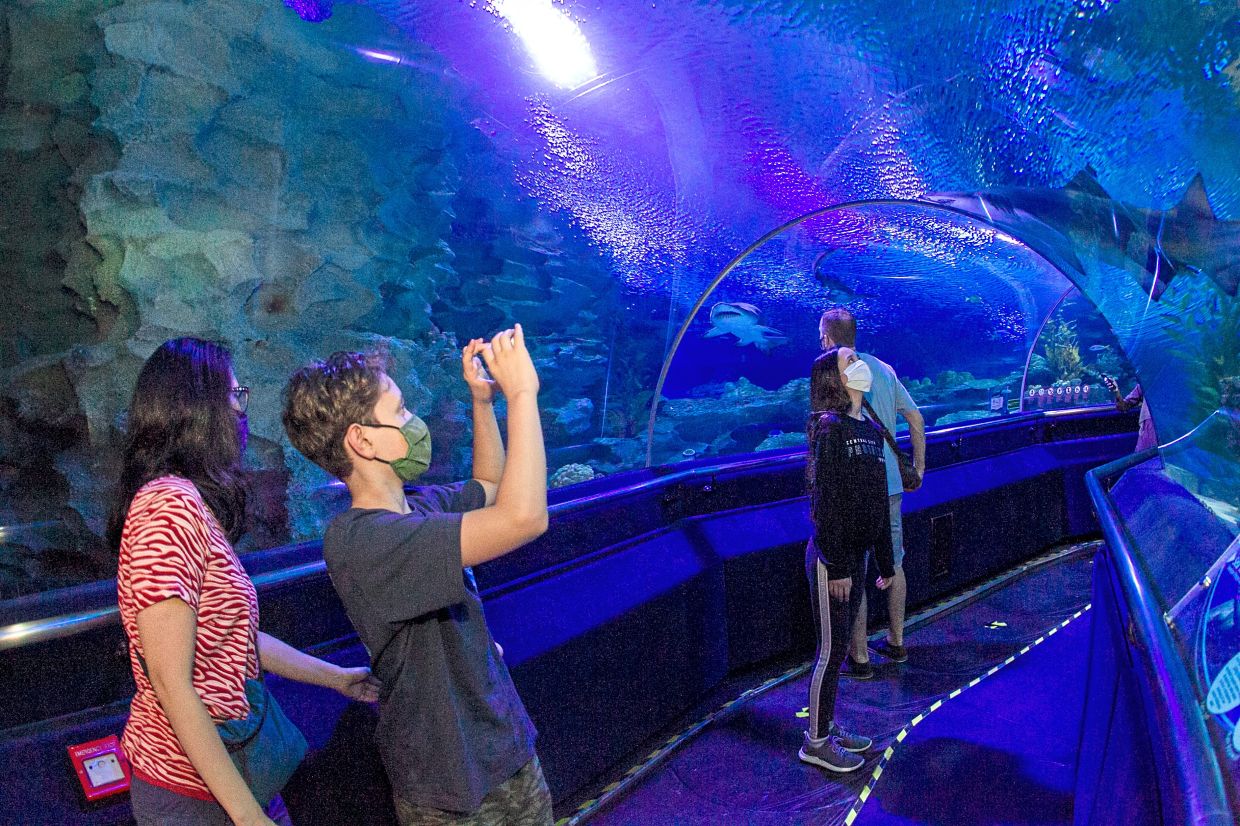 Aquaria KLCC is among places seeing an increase in the number of visitors since the second MCO. — Filepic

Rawang resident Jeevan Murugan, who came to the zoo with his wife, mother, two sisters and nine-year-old niece, shared the same sentiment.

“And we can do sightseeing here without spending much, ” he said.

The 38-year-old, who works in a bank, said local attractions should be allowed to open, provided that visitors complied strictly with the Covid-19 standard operating procedures.

He opined that it was still too early for the government to lift the ban on interstate travel.

“The daily number of confirmed coronavirus cases is still hovering above 1,000. 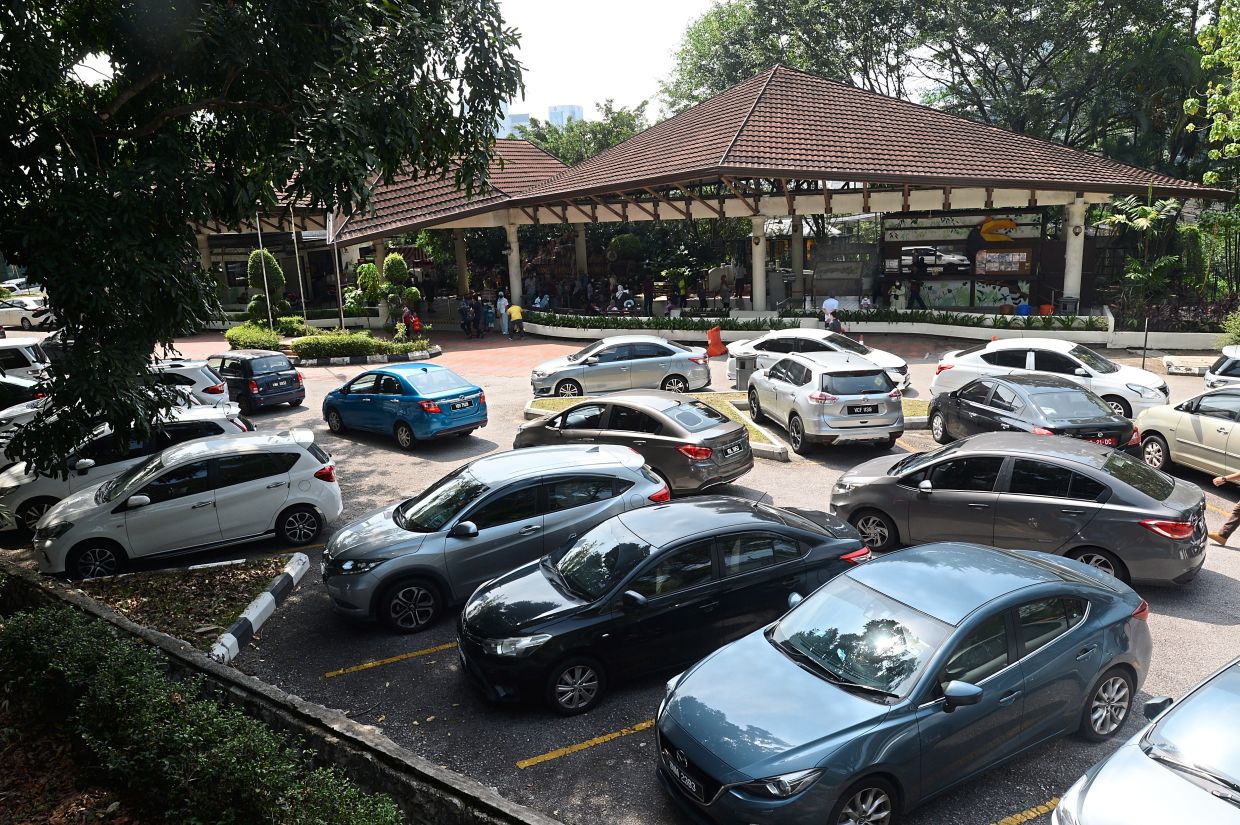 A long queue of cars looking for parking at the Kuala Lumpur Bird Park on a weekend.

“We need to wait until the figure is low enough before allowing people to cross state borders again, ” he said.

Mother-of-three Aslawiyah Mamat, however, hoped the government would consider allowing interstate travel for Hari Raya Aidilfitri in May.

“My husband and I haven’t gone back to our hometowns (in Terengganu and Kedah respectively) in a long time.

“It would be nice if we could go back this year, ” said the 35-year-old religious teacher.

Her husband Muhammad Farizan Abu Hassan, 40, said they brought their children to the zoo because it was less crowded compared to other venues.

The Health Ministry, he said, was not keen on permitting interstate travel as the lifting of the ban in December last year resulted in 32 new Covid-19 clusters breaking out.

A retiree who only wanted to be known as Hashim, 56, said the rising trend of “revenge travel” was a sign of the economy heating up again.

“Those who have held on to their job during the pandemic have been saving up, thanks to the various assistance from the government.

“Now unable to go anywhere, they are spending their money on visits to local attractions, ” he said. 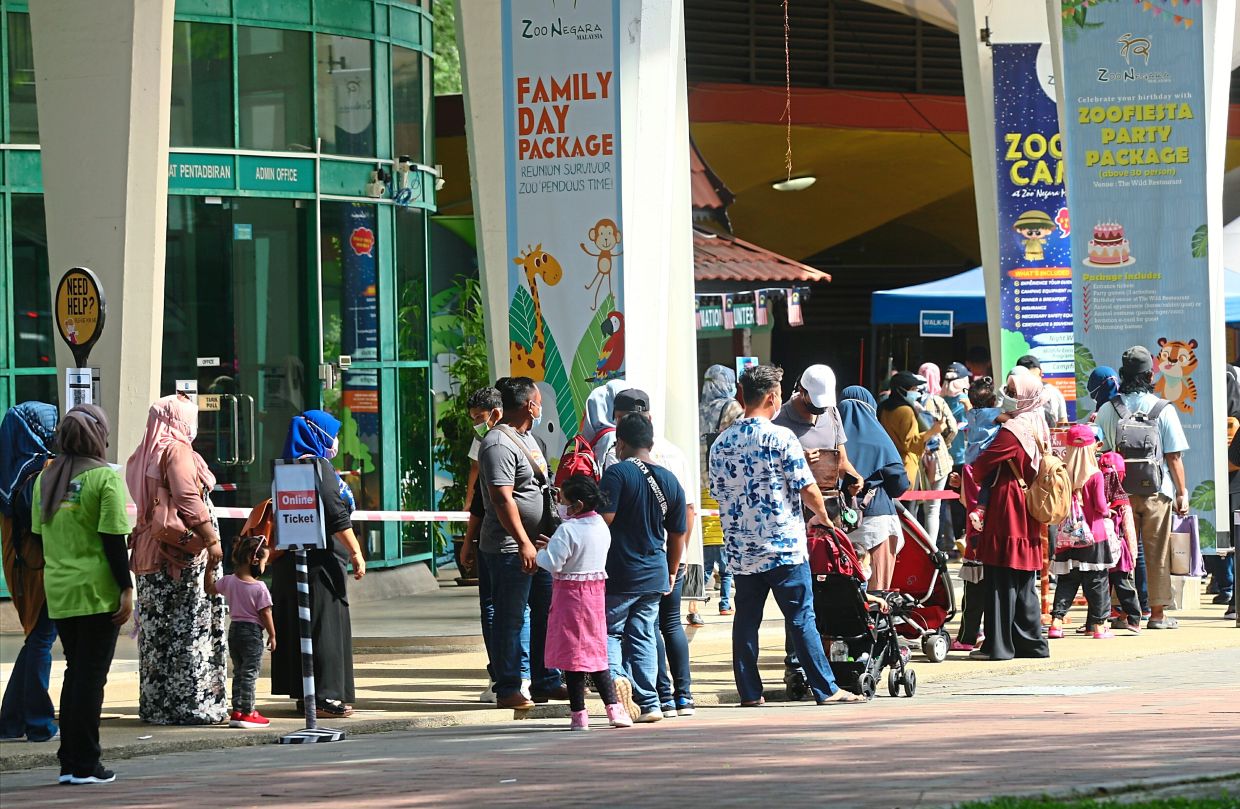 Police have reminded visitors at Zoo Negara that only one representative from a group is allowed to queue for tickets to avoid crowding at the counters.

“I have been able to save more money during the MCO period.

“I have also cut down on transportation costs such as petrol and toll as I have been working from home since last year, ” said Hafiz.

The ban on interstate travel, he said, might prove a boon for local attractions in the Klang Valley.

“There are many interesting places here in the capital city itself which we may not have otherwise visited if not for the travel ban, ” he said, adding that this was his first time visiting Central Market in almost 20 years.

“This is especially the case on weekends.

“It may be because the MCO has been relaxed, so more people are coming out to shop.

“Some of our tenants are also having promotions to attract shoppers, ” she said, adding that the complex operated from 10am to 6pm daily for now. 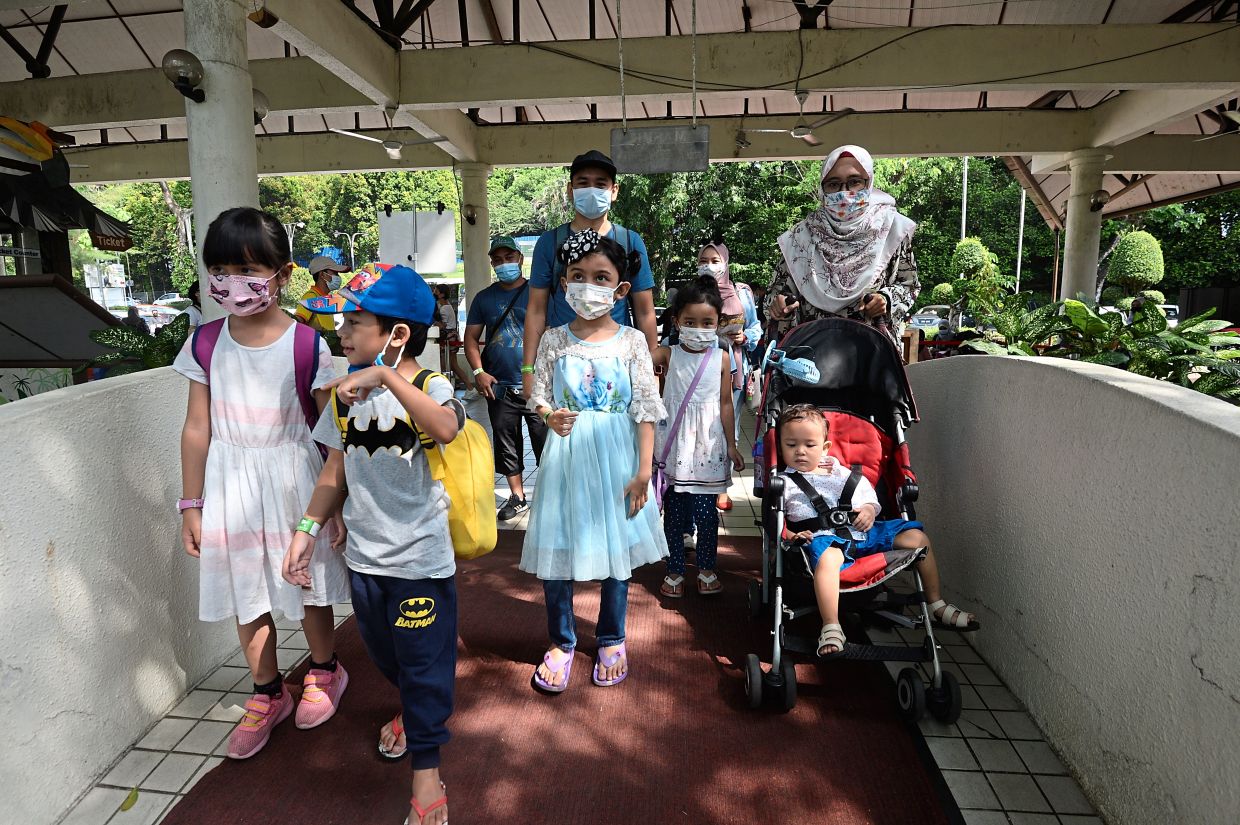 Mohd Rashid Murad and his wife Saidah Asilah Abdul Shukor with their children getting ready to enter the Kuala Lumpur Bird Park on a weekend visit.

A check by StarMetro on a weekend found a modest amount of foot traffic in the cultural market even though some shops were still closed.

Meanwhile, Zoo Negara deputy president Rosly Ahmat Lana said the venue saw a drastic increase in visitors in recent weeks, with the majority of whom being families with children.

“These parents want to relieve their children of boredom after staying in the house for an extended period of time.

“The number of visitors has been very encouraging. 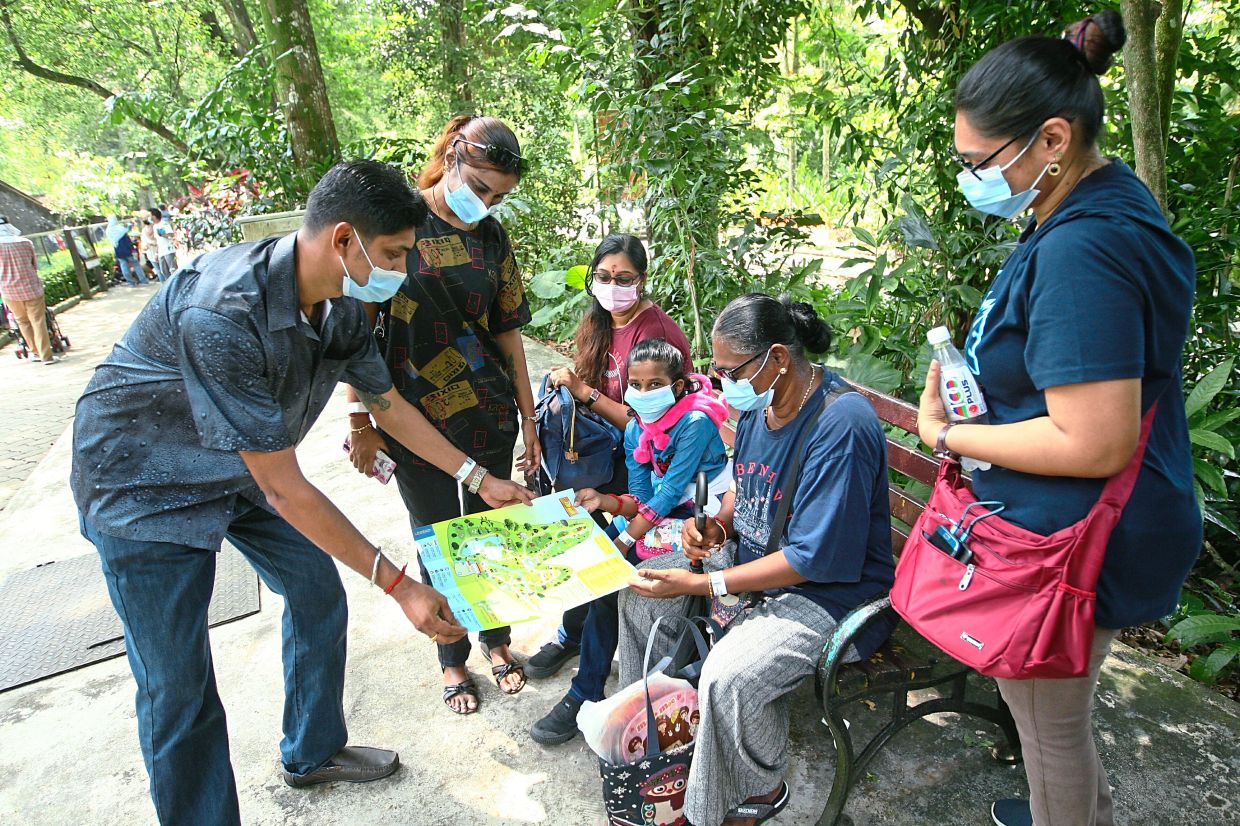 Jeevan (left) and his family prefer to visit Zoo Negara over malls to spend quality time together.

Rosly said the zoo’s reptile centre housing amphibians and snakes had been reopened and would be officially launched soon.

Aquaria KLCC executive director Daryl Foong said the venue’s footfall rose from about 300 a day during the first week after the conditional MCO to 800 as of last week.

“We believe the main factor (causing the increase) is that many Malaysians are looking to relieve their ‘cabin fever’ as they have been unable to indulge in activities and pastimes during the MCO.

“Many are feeling safer to go out again with the vaccine rollout, ” he said.