Gurmit standing beside a poster of her late husband Karpal Singh at the DAP operation centre for Bukit Gelugor in Penang where the late politician had served as its MP for 10 years. — Filepic

THE posthumous state award bestowed on former DAP chairman Karpal Singh is an ultimate recognition of his sacrifices for the country, said his wife Gurmit Kaur.

“It is a long deserved recognition and I am very proud to receive this on his behalf.

“At the end of all this, it is indeed an honour bestowed upon him, which is long overdue, ” she said.

Karpal Singh was a prominent lawyer who earned the moniker ‘Tiger of Jelutong’, having served as Jelutong MP for 21 years.

He was also the Bukit Gelugor MP for 10 years and was a prominent advocate for human rights.

His son Jagdeep Singh, who is also a state exco member, said it was a “tearful” posthumous award bestowed on his father.

“I am in tears, as Karpal Singh was an institution and the award today was a recognition by all Penangites.

“This award clearly shows that the government recognised the difficult times he underwent and his sacrifices to uphold justice for the people.

“This award is a testimony that he is finally respected and honoured for his service to the nation, ” he said. 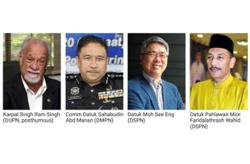