Septuagenarian dares to break with convention by taking services mobile

Lee keeping his distance by staying on the steps of his truck while meeting with a customer.

FOOD is often the first thing that comes to mind at the mention of mobile truck businesses.

Seventy-year-old Vincent Lee dares to be different and challenges that perception by offering his watch repair services from a mobile truck in Bandar Sungai Long, Kajang.

The story of how he came up with the idea could be traced back to three years ago when he operated from a shared space in a corner shoplot.

“Hidden in one corner, I didn’t have much exposure, ” recalled the father of three.

He said 80% of his customers were university students who spotted him while on their way to nearby cafes.

Given his limited customer profile, business was naturally slow when the students went on semester break.

Having started life as an apprentice at his father’s watch repair shop in Jalan Pudu, Kuala Lumpur, before furthering his career in the field of timepiece maintenance, Lee was never the type to give up easily.

At one point during the mid-1990s, he had a wholesale watch business.

With three salesmen under his supervision, he ran a company with an annual RM1mil turnover before he was hit hard by the 1997 recession.

Despite that, he managed to start afresh as a kindergarten owner, paid off his debts and bought a house.

Later, he became a manager of a hotel in Cameron Highlands, Pahang, until he retired at 60.

When Lee realised his post-retirement venture was not going as planned, he began to look at alternatives.

“It so happened that at the same time, the Selangor government was promoting the idea of mobile truck businesses. That was when I began to plan, ” he said.

Lee was further encouraged by the idea when he saw entrepreneurs running mobile truck businesses at Dataran Kemerdekaan in Shah Alam, Selangor, during a smart truck festival organised by Shah Alam City Council in 2017.

By mid-2019, Lee saved up for a second-hand three-tonne lorry and installed it with a power generator set as well as modifications --- all costing him RM80,000 --- to start his mobile truck business.

“My family questioned my decision to invest in a new business at this point in my life, ” said Lee, whose life philosophy was to continue working as long as he was alive.

Furthermore, he was confident that watch repair services were much needed by people and it was an opportunity he was not willing to let pass.

However, Lee’s biggest challenge was not in raising the capital nor starting up, it was in obtaining a lorry driver’s licence.

“I was 68 when I sat for my theory exam. The tester saw me and the first thing he asked was why I was learning to drive a lorry at this age. I simply told him “Mau cari makan lah.”

“Firstly, my Bahasa Malaysia was rusty, and secondly, I was still managing the business from the shoplot and didn’t have much time to study.

“But I knew that if I did not have a licence, I would not be able to drive the lorry. So, I persevered, ” he said.

By the end of 2019, Lee was ready to move from his little corner in the shoplot and into his new mobile truck.

He is currently parked on Jalan SL1/3 opposite a Chinese economy rice shop in Kajang.

For safety, his children installed a CCTV camera inside the truck to keep an eye on him.

Lee handles repairs for manual, automatic and chronograph movements, including luxury brand timepieces, in addition to repairs on other types of watches.

He hopes to carry on operating from his mobile truck for another 10 years as business has improved 100% since moving out from his former workplace.

Lee, who needed only the aid of a loupe to see the tiny parts of a watch movement, said his eyesight was still good, unlike most people half his age who required spectacles.

To care for his eyes, he said he avoided looking at digital devices as much as possible and would only use his cellphone to answer messages from clients. Television time is limited to two hours every evening.

Lee, who has 17 years of experience servicing Seiko watches, comes from a family who specialised in the trade.

Besides his late father, all his five younger brothers are also in the watch industry.

His second brother runs a weekend enterprise selling and repairing second-hand watches at Amcorp Mall in Petaling Jaya while the third is based in London with a franchise group that sold Swiss watches.

The fourth brother works for a international watch retailer, the fifth owns a watch retail business in Kuala Lumpur and the sixth brother is working at the Rado centre in Beijing, China. 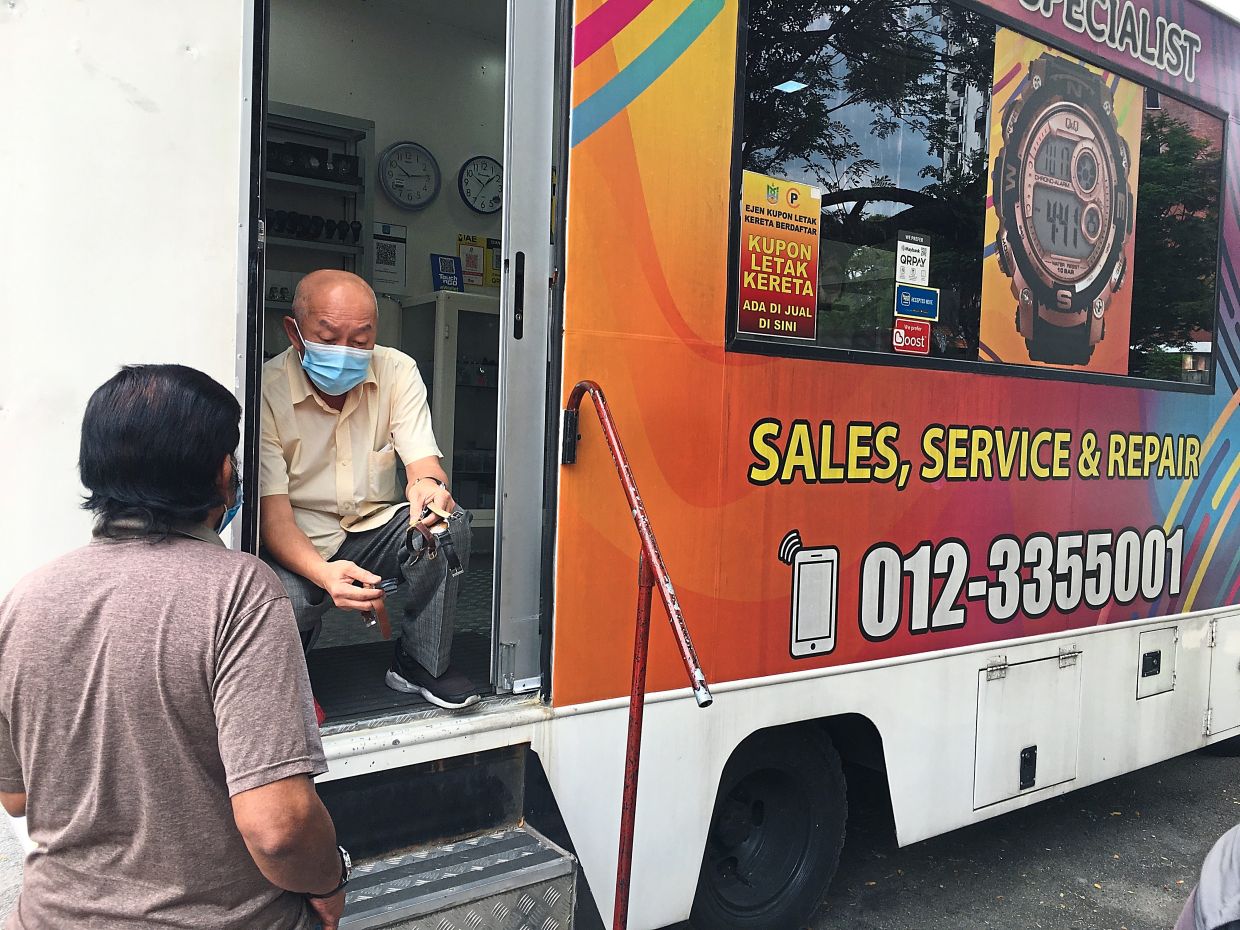 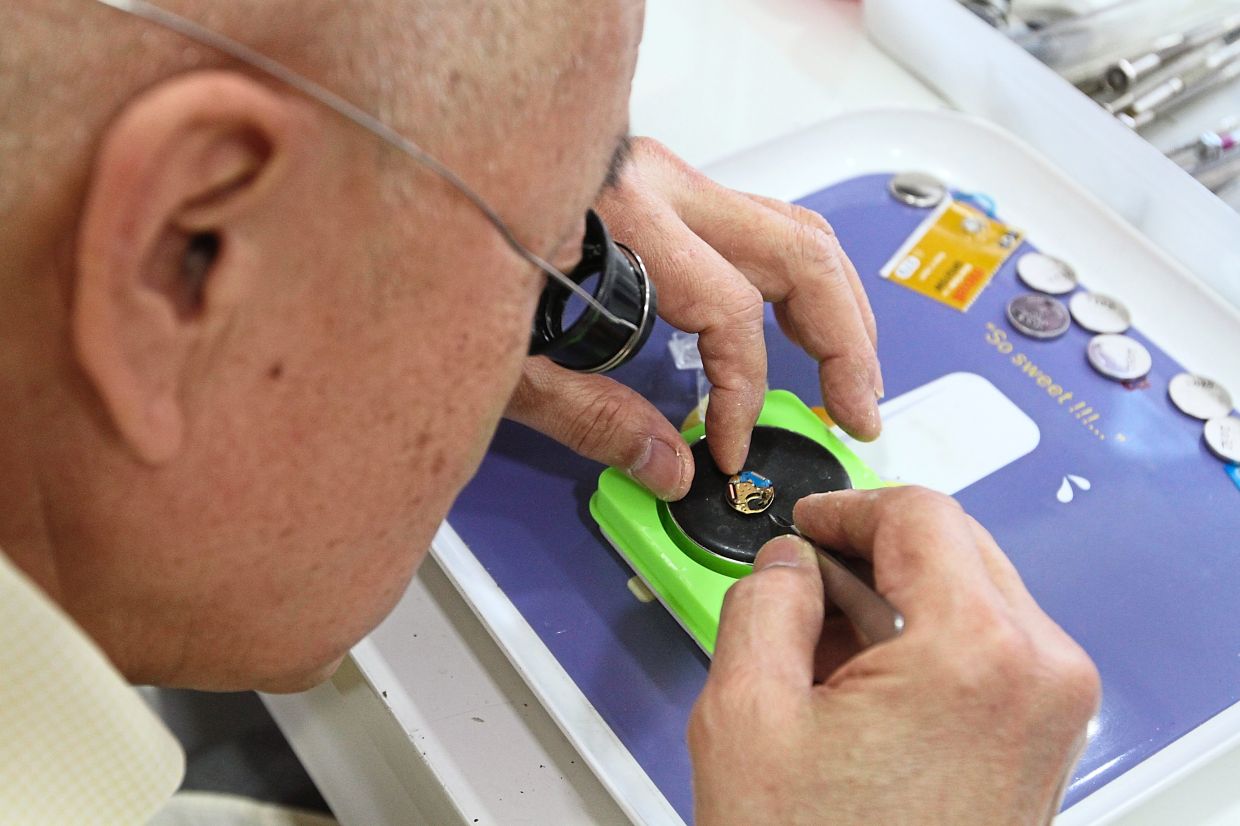 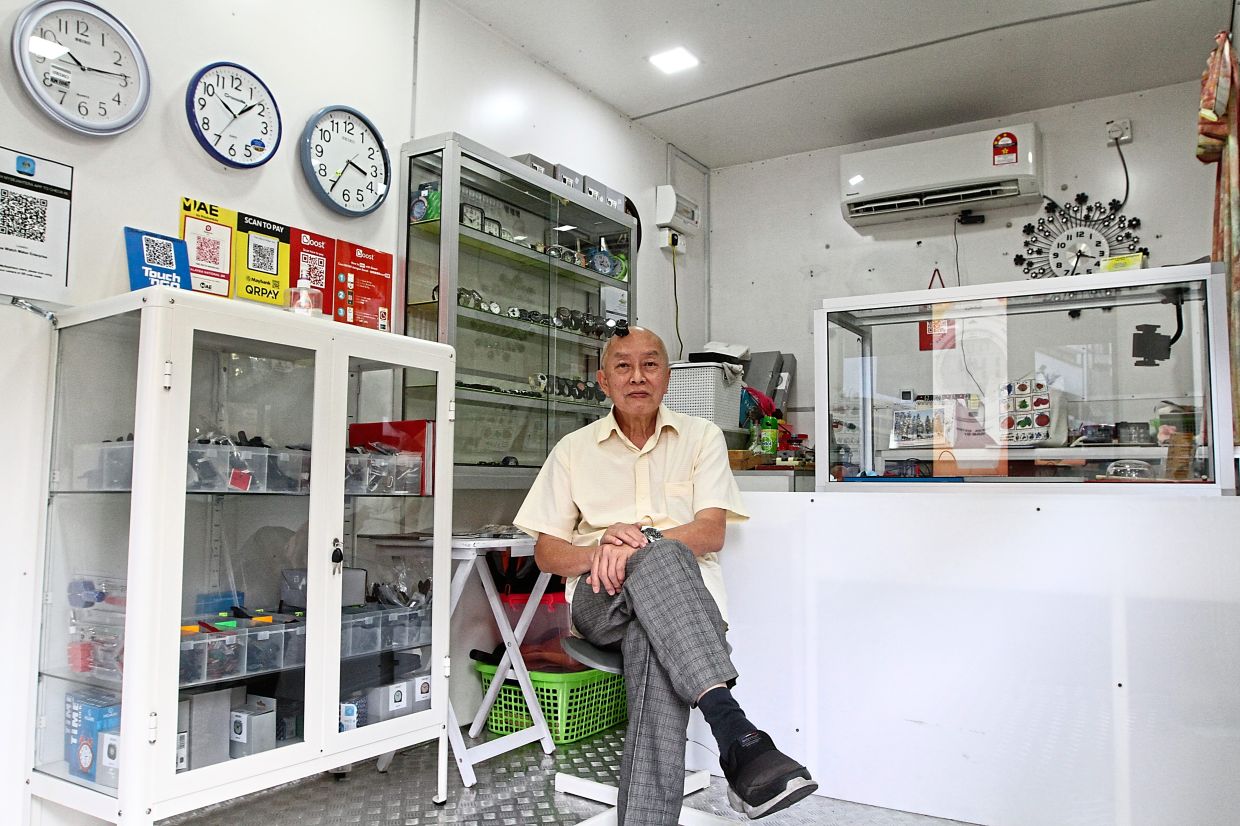 Lee keeping his distance by staying on the steps of his truck while meeting with a customer.

Lee only needs the aid of a loupe for his work, as his eyesight is still good.

Lee inside his truck modified into a comfortable working space.