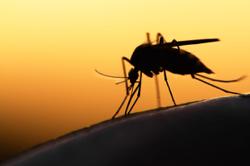 Wai plans to continue repairing clocks and watches for as long as he can. — Photos: ART CHEN, KK SHAM and LOW BOON TAT/The Star

WATCH repairers have plenty of time on their hands, so to speak.

As they strap on their eye loupes (a magnification device to see small details), they make it their mission to focus on the inner workings of watches and clocks.

The ubiquitous kedai jam or old watch and repair shops that mostly occupy shophouses in pre-war buildings in Malaysia, have second or third generation timepiece restorers at the helm.

Some of them who took over the business from their fathers, are resigned to the fact that there may not be any continuity beyond them.

However, there are some younger ones who have taken to the trade on their own through sheer interest in learning the skill and making a living from it.

StarMetro speaks to old-timers and a new kid on the block to get their opinion on the art of repairing timepieces. Eye on Swiss watches

Edwin Fong, 64, is the proprietor of the Watches of Switzerland repair centre and has been in the business since 2001.

The Johor-born businessman learned the tools of the trade at the young age of 15 from his father, Fong Kwan Swee, who had a shop in Segamat, Johor.

“I spent my free time after school helping him repair watches, ” Edwin said.Kwan Swee set up his watch repair services in a pre-war building in 1939, but the shop was razed by fire in 1979.

The elder Fong called it quits after that and Edwin, who found his calling in fixing watches, continued with the trade on his own.

From a mechanical standpoint, he said watches did not change in structure unlike computers.

“When you acquire a set of skills, it belongs to you forever.

“This skill can be used for the foreseeable future, ” he added.

It is now the largest watch repair chain in Malaysia, having done more than 80,000 repairs.

Prior to this, people got their watches repaired at the original service centres of the respective timepiece brands.

It took Edwin five years to learn the inner workings of watches.

“It never occurred to me to do watch repairing on my own, because back then people thought you needed a shop selling watches to repair watches, ” he said.

Suffice to say, there were only a few watch repair shops then.

Edwin opened eight Watches of Switzerland branches within a span of 10 years, and he never thought he would open more.

Out of the eight, four are still standing.

In the earlier years, he said, in order to tell what was wrong with a watch, he articulated in “pictures” to reflect the parts such as the balance wheel, escapement wheel and main spring.

“I read books and manuals on watch repairing and worked in watch companies; from there I picked up the skill, ” he said.

He has six staff aged in their 50s, 60s and 80s, with the oldest person having worked with his father.

“The younger generation is not keen on continuing this business, ” he said.

As long as people are still willing to spend money to buy mechanical watches, Edwin is confident his trade will last for the foreseeable future, despite the advent of smart watches that have flooded the market.

Over at Kedai Jam Yoke Chong in Jalan Stesen 1 in Klang, watch repairer Wai Wah never misses a day of work if he can help it.

Born in Bentong, Pahang, the 84-year-old moved to Klang in Selangor and has been at the current location since the late 1950s.

At 16 years old, he learned the tools of the trade from other repairmen. He is a bachelor and is living with a friend currently.

“I had to undergo cataract surgery 12 years ago, but I can still repair watches, although I’m a bit slow now, ” said the endearing octogenarian, who is partially deaf in one ear.

Wai can repair all types of mechanical watches.

His father was a timber labourer in Bentong, who encouraged his son to take up watch repairing.

“He did not want me to slave in the rain and hot sun like he did, ” said Wai.

He said he used to get a lot of watches to repair at his Klang shop but it was not so these days.

“Now it’s two to three watches only in a week. I still have my regular customers who trust that I can still repair their watches, ” he said, adding that he did not usually get a luxury brand watch to repair.

Wai plans to continue repairing watches for as long as he can.

“A one-man business is easy to manage.

“The only problem is finding spare parts for the watches.

“When I was younger, I used to go to downtown Kuala Lumpur to engage an agent, but now I just call them on the phone, ” he said.

One of the guys

Born and bred in Sentul, Kuala Lumpur, Chitra Devi Suppiah, 44, learned the art of watch repairing from her husband Raja Mogan Raju, who is also self-taught in the trade.

Raju used to be a second-hand car salesman, but had an interest in collecting antiques, said Chitra.

“He would stand and observe for hours while his friend repaired watches, to learn the inner workings of timepieces.

“He always liked repairing things like watches, clocks and radios.

“It was one of the things I loved about him when I first met him. I liked seeing him work, ” she said, adding that they have been married for 22 years and have three children.

After resigning from her job as a clerk and unable to find another suitable job, Chitra decided to join Raju to start Watch Masters by RnR Watch Services in 2003.

“We bought and sold old watches in Amcorp Mall, and restoring all types.

“I found it interesting to pull apart new and old clocks and put them back again, same with watches.

Chitra said watch repairing was her newfound love as she enjoyed learning the skill, especially the intricacies of the timepieces.

“This is my life now, aside from being a full-time mother to three teenagers, ” she said. 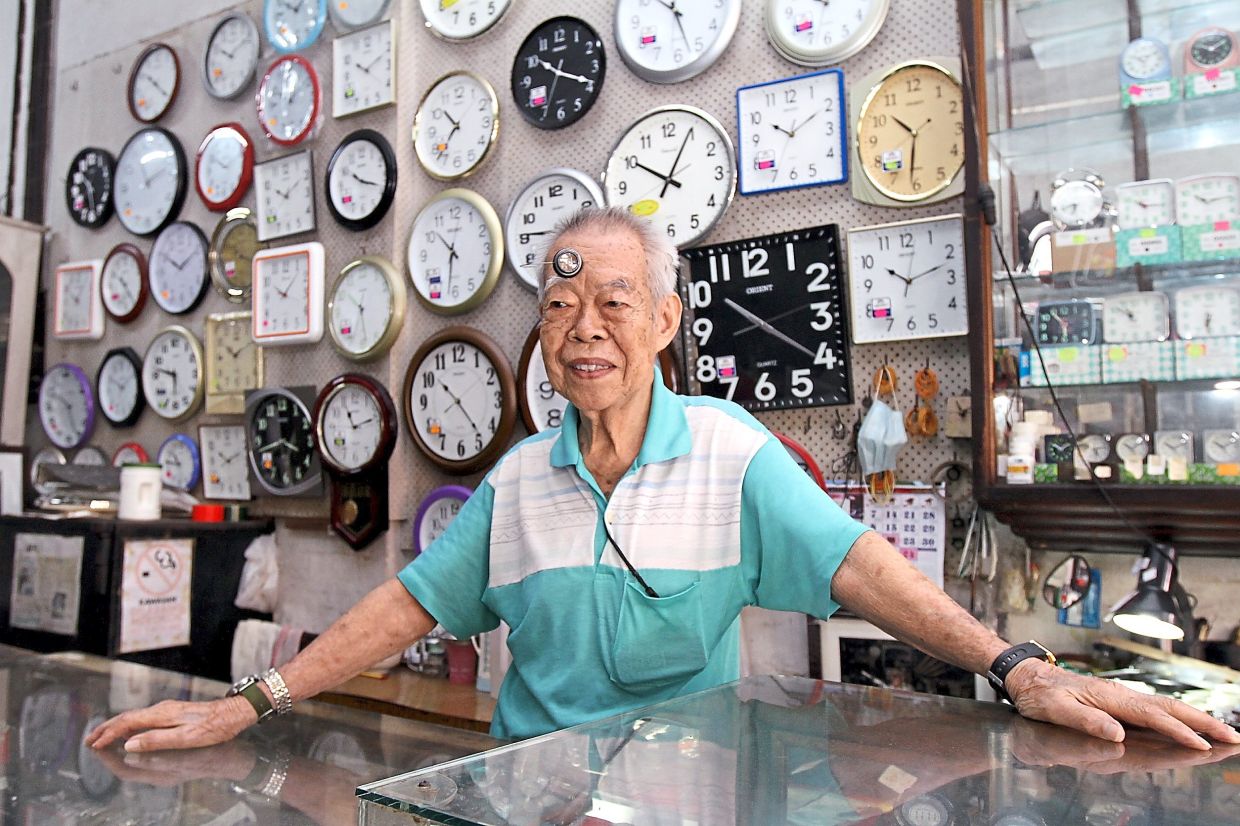 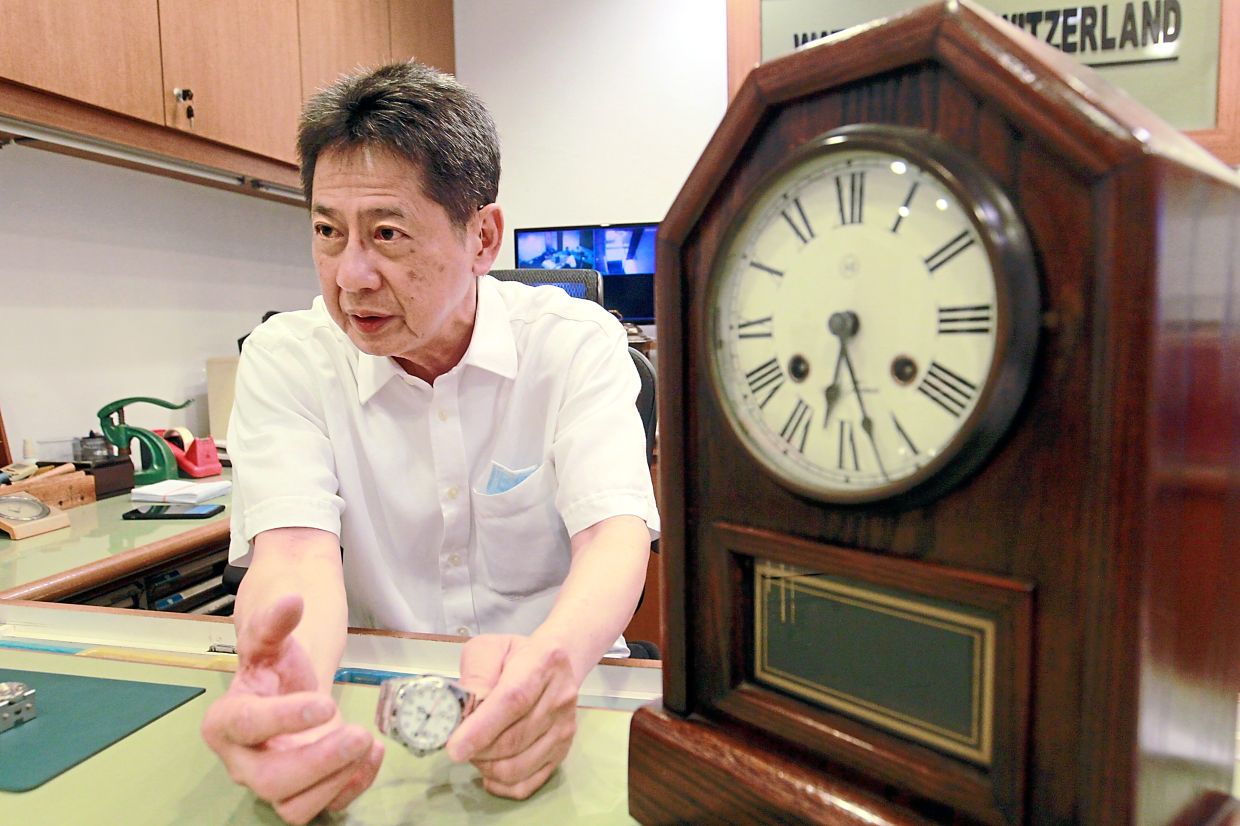 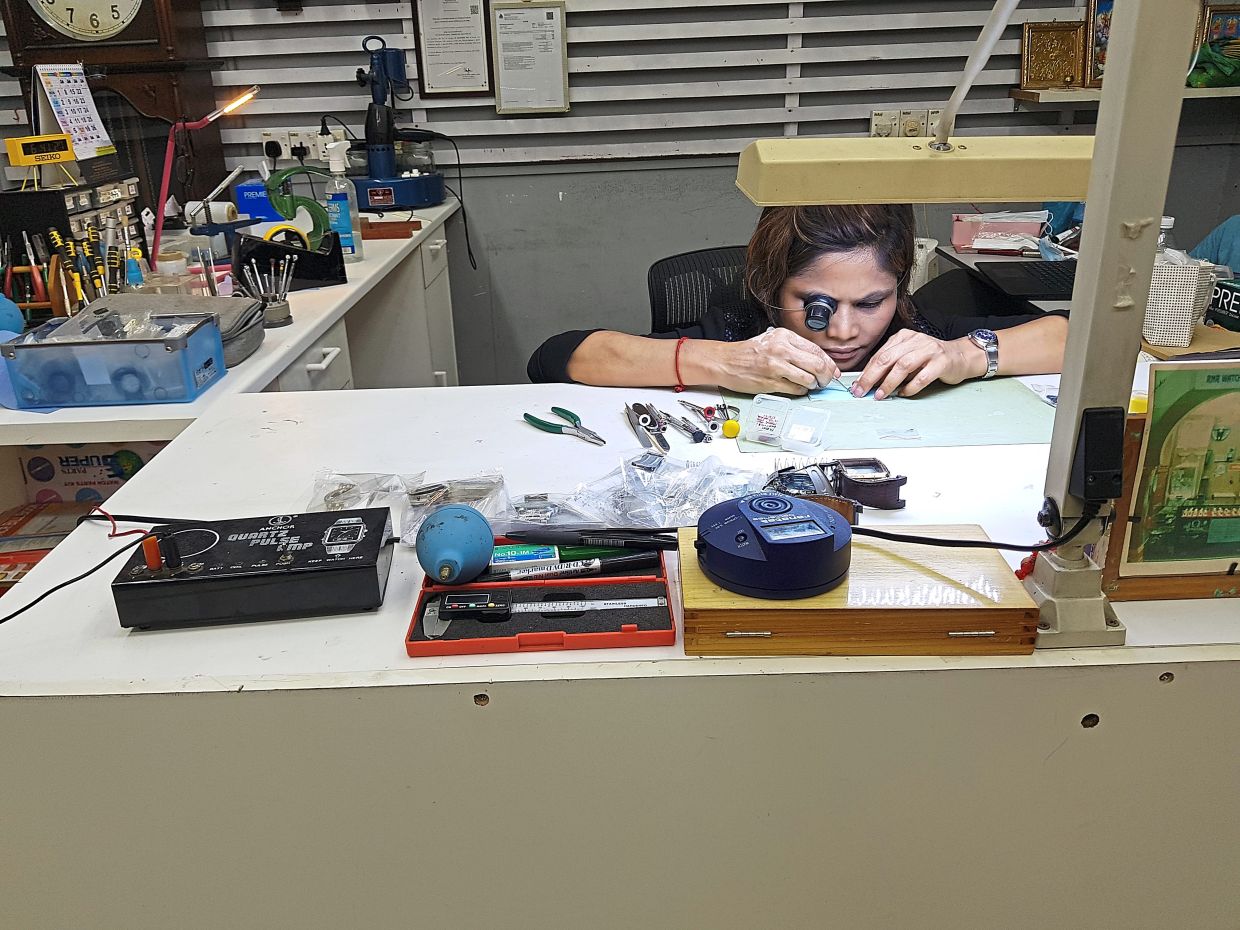 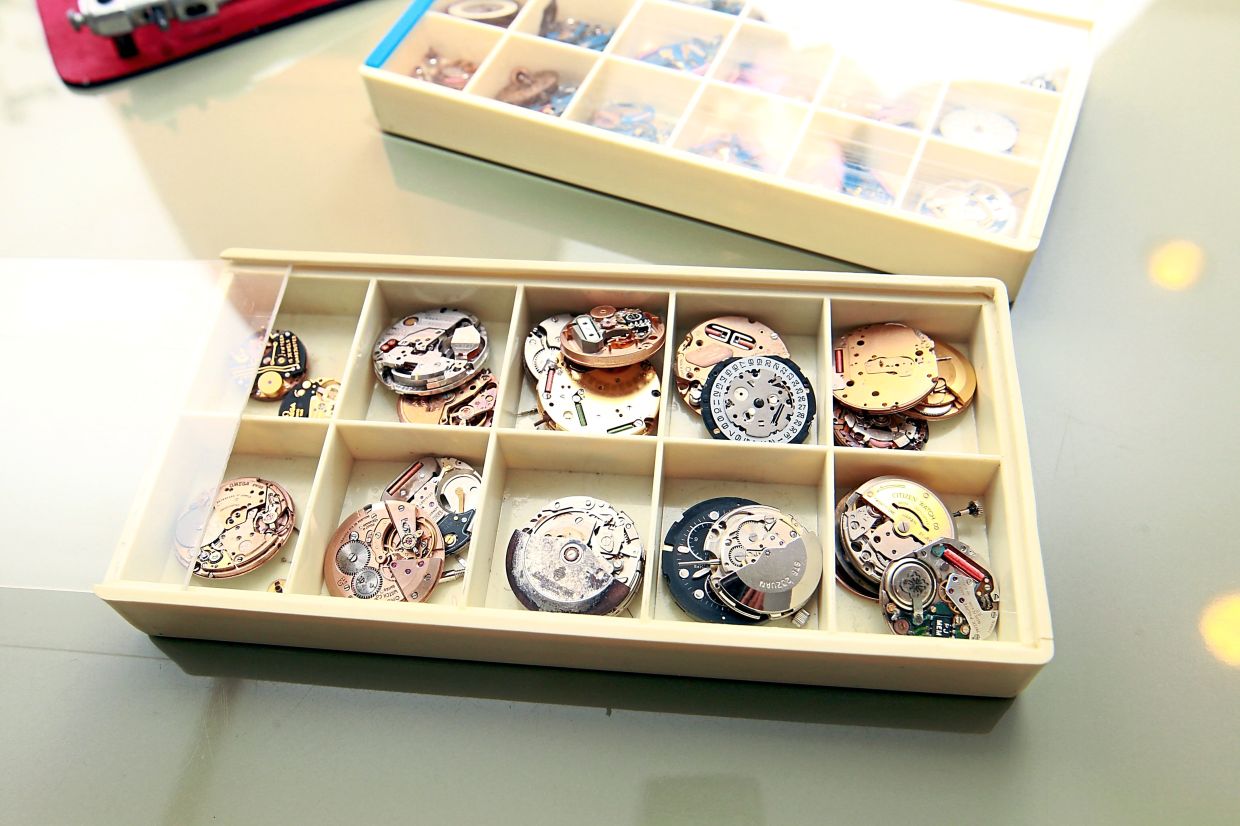 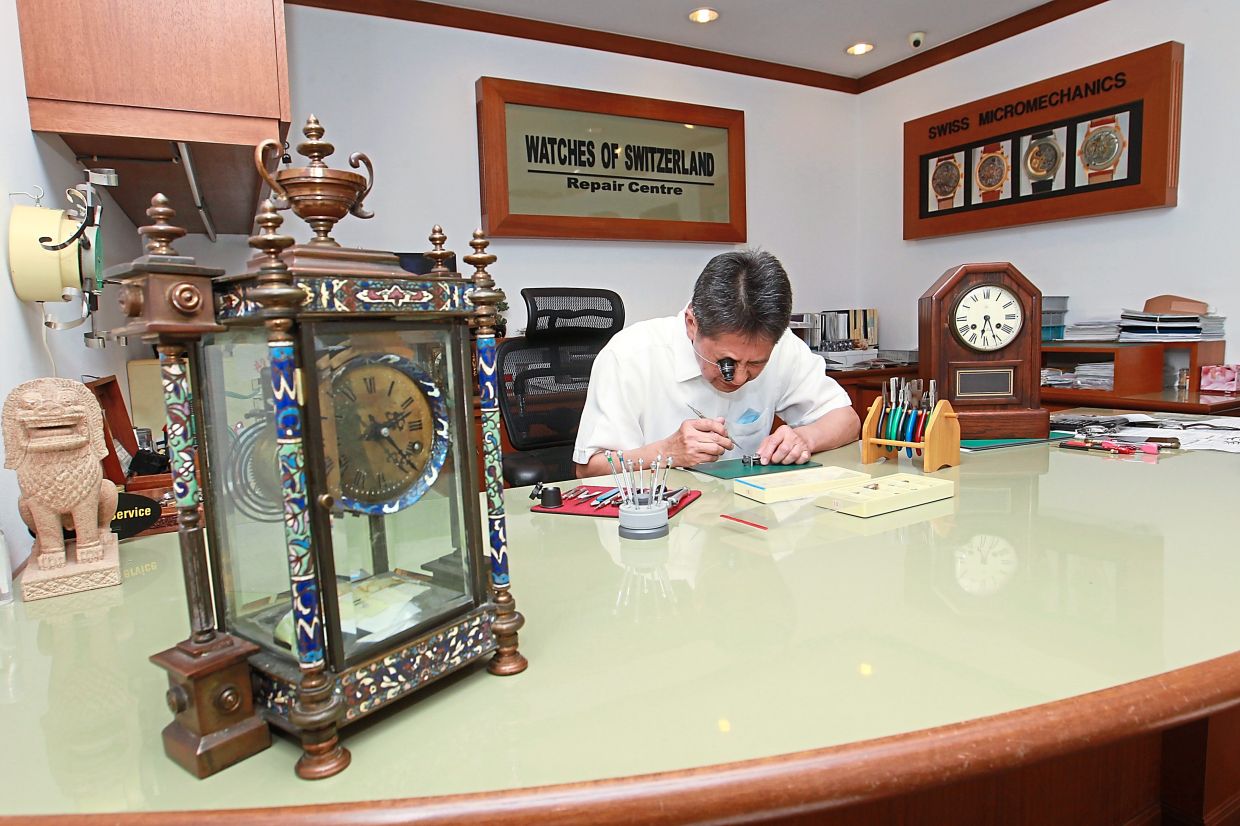 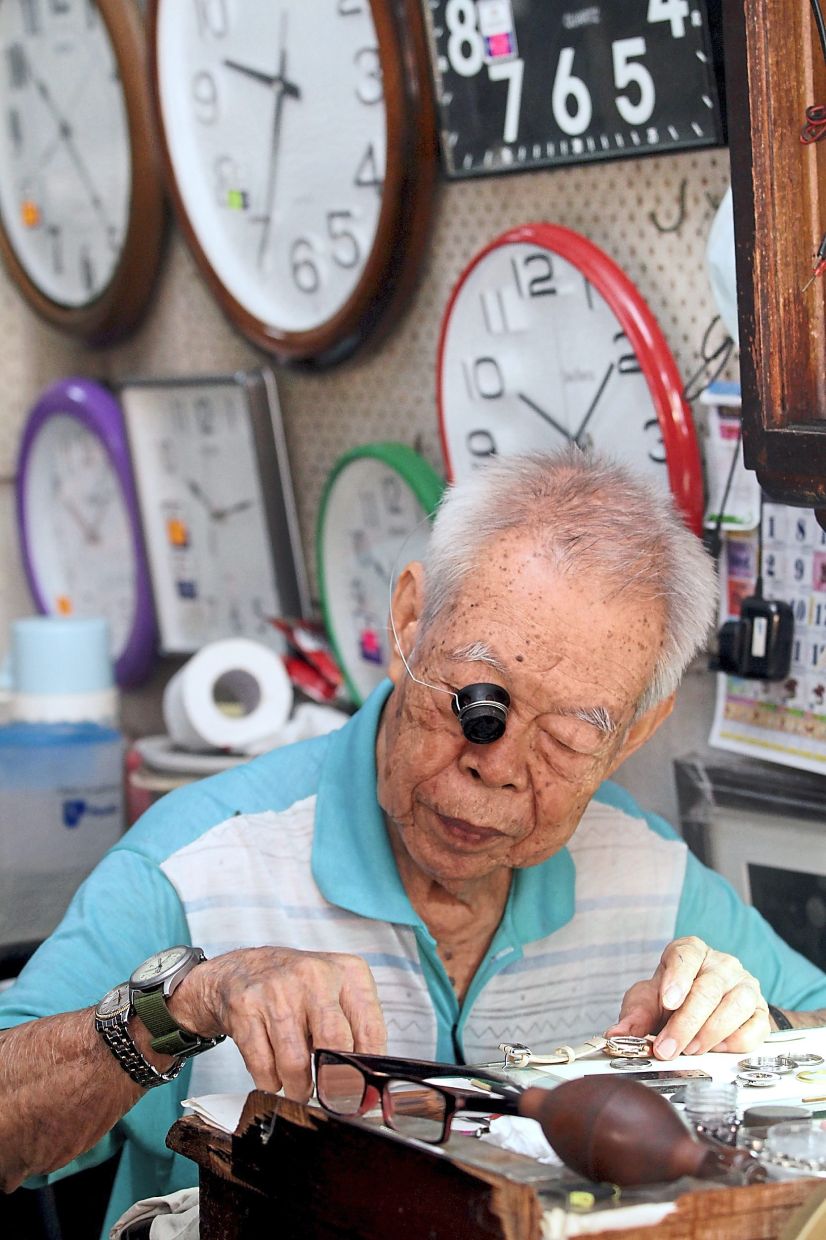 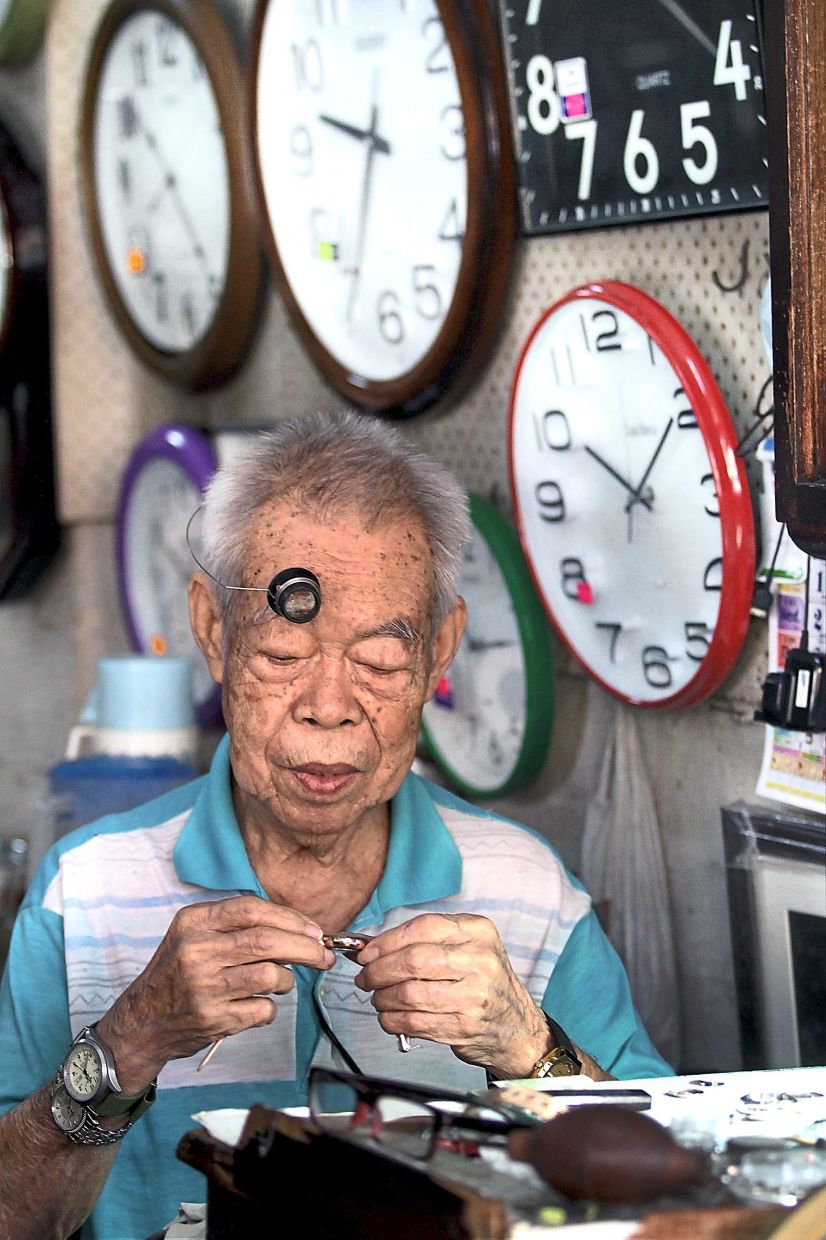 Wai plans to continue repairing clocks and watches for as long as he can. — Photos: ART CHEN, KK SHAM and LOW BOON TAT/The Star

Chitra learned to repair watches from her husband.

Unlike computers, watches do not change in structure.

The Watches of Switzerland repair centre that started off as a small shop at the former Atria Shopping Centre in Damansara Jaya, is now the largest watch repair chain centre in Malaysia having done more than 80,000 repairs.

Wai, who never misses a day of work, plans to continue repairing watches for as long as he can.

Septuagenarian dares to break with convention by taking services mobile 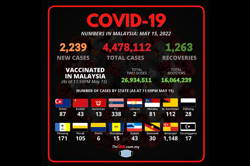