“Connectivity and accessibility between Johor Baru and Singapore will be enhanced once the project is up and running by 2026, ” he said when contacted.

Tan said the project would help ease the infamous traffic congestion along the 1.05km Causeway, a road and rail link between Johor Baru and Singapore.

Completed in 1924, the Causeway is the busiest border checkpoint in the world, with an estimated 350,000 to 400,000 travellers daily before the Covid-19 pandemic affected travel between both countries last year.

Tan said compared to a few hours drive via the Causeway, during peak hours prior to the movement control order, the RTS services would offer seamless travel time below 10 minutes.

“Residential developments in Johor Baru, especially those within close proximity to the RTS, will attract demand for various groups, ” he added.

They include Malaysians working in Singapore, Singaporeans capitalising on the relatively lower cost of living in Johor Baru as well as investors.

He said better connectivity and accessibility would also boost demand for commercial developments in the Iskandar Malaysia region.

Tan said some companies in Singapore might set up businesses in Iskandar Malaysia to capitalise on its lower cost base, once the bad traffic congestion of the Causeway was resolved.

“Nevertheless, the boost in demand for commercial development will take time and other factors such as government policies as well as social, economic and political dynamics come into play in attracting these businesses, ” he pointed out.

In general, Tan said, the demand for high-rise residences close to the RTS station would also improve, but that depended on a confluence of other interrelated factors, including the economic outlook and sentiment, job security and bringing the pandemic under control.

The take-up rate for different locations and projects would vary with some locations or projects seeing immediate improvement in terms of take-up rate and price while others would take longer to pick up, he said.

In drawing a comparison, he added that the price range for new high-rise residences in locations near Johor Baru city centre was around RM600 to RM1,200 per square foot, while the average price of condominiums in Woodlands, considered an outskirts area, was around S$1,000 per square foot (RM3,000).

“The price disparity will be far greater if we were to compare it to prime locations in Singapore where the high-rise property is easily three times more expensive.”

Tan said once the RTS Link was ready in six years and the pandemic brought under control,

More day-trippers and weekend travellers from Singapore would venture across to Johor Baru using the RTS Link service.

“This is especially so if the relative currency rate remains favourable to the Singapore currency, ” he added. 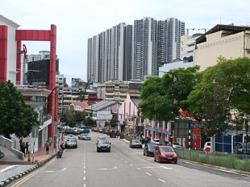